Franco one of several top prospects picked for player pools 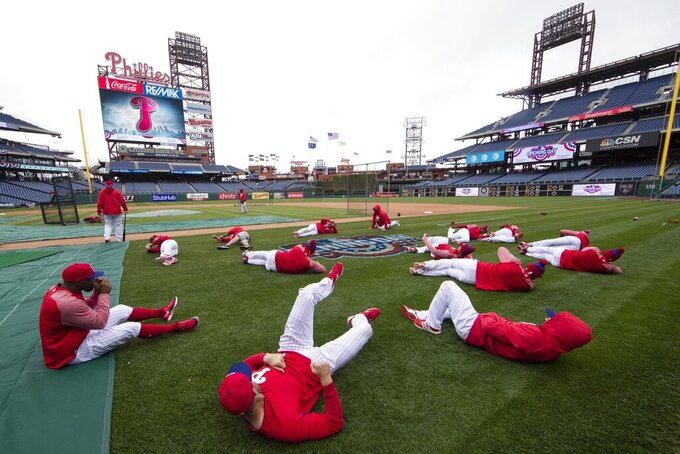 FILE - In this April 7, 2017, file photo, members of the Philadelphia Phillies stretch before the team's baseball game against the Washington Nationals in Philadelphia. Five players for the Philadelphia Phillies have tested positive for COVID-19 at the team's spring camp in Florida, prompting the club to indefinitely close the complex. The team also said Friday, June 19, 2020, that three staff members at the camp have tested positive. The club didn't identify any of those affected. (AP Photo/Matt Rourke, File)

Top prospect Wander Franco is part of the Tampa Bay Rays' 60-man player pool, and the Detroit Tigers are including their most heralded young pitchers as baseball gears up for its abbreviated season.

Sunday was the deadline for teams to submit player pools, although additions can be made later. Many teams announced pools well below the 60-player limit.

Franco, a 19-year-old shortstop, is ranked as the No. 1 prospect in baseball by MLB Pipeline. He spent last season at Class A, so it would be quite a jump for him to contribute in the majors in the immediate future, but putting him in the player pool makes him an option for the Rays — and could help his development in a year when the coronavirus shut down the minor leagues.

“They are some of our more advanced prospects," Rays general manager Erik Neander said. “Certainly on the position player side that’s where things went and why Wander was a leading candidate for a spot.”

The Tigers are rebuilding around pitching prospects — including Casey Mize, the No. 1 pick in the 2018 draft. He's in their player pool, along with Matt Manning, Tarik Skubal, Alex Faedo and Franklin Perez.

A majority of teams took at least five catchers, and the defending champion Washington Nationals included a whopping 36 pitchers in their pool. The Baltimore Orioles announced only 44 players total at this time — not counting outfielder Trey Mancini, who was listed on the 45-day injured list and is likely to miss the season following colon cancer surgery in March.

The Nationals included infielder Ryan Zimmerman in their pool, although he said recently he was still deciding whether he would play.

The Pittsburgh Pirates' player pool was without reliever Edgar Santana, who will miss all of the 2020 season after being suspended 80 games for violating Major League Baseball’s Joint Drug Prevention and Treatment Program. MLB announced Sunday that Santana tested positive for a performance-enhancing substance.

The Pirates did not include right-hander Quinn Priester or shortstop Nick Gonzales, their top draft picks from 2019 and 2020.

“There was a number of players, aside from Quinn and Nick, who we considered, and we just felt like that we remain hopeful that there will be an opportunity to get them in uniform at a facility in 2020 and if we can do that, that would be just a more productive way for them to continue their development,” general manager Ben Cherington said. “In Quinn’s case, and really I would say that Quinn and a number of younger pitchers who haven’t yet been at the full season level, we just felt like this wasn’t quite the time to include them in this group.”

Right-hander Ubaldo Jimenez, who was attempting a comeback with Colorado during spring training before the virus halted play, was not included in the Rockies' player pool.

Seattle outfielder Mitch Haniger (back) was put on the 45-day injured list. He's not in the 60-player pool, but the Mariners can add him later.

AP Sports Writers Fred Goodall and Will Graves contributed to this report.