Ga Tech finally gets home finale in makeup vs Pittsburgh 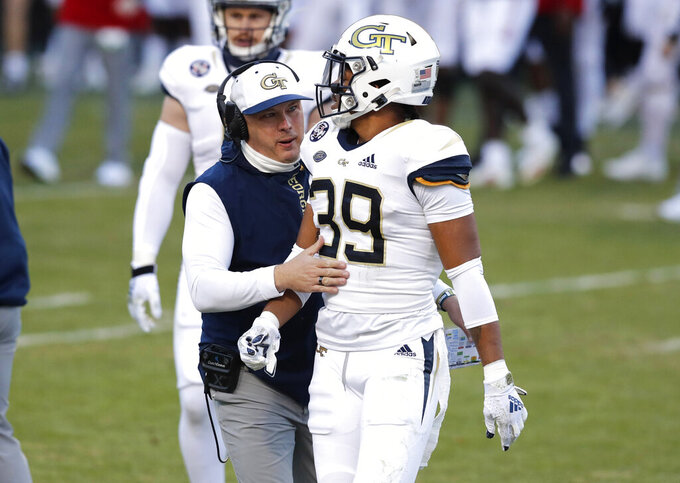 ATLANTA (AP) — Georgia Tech will try to send the seniors out in style when it finally plays the last game of the season at Bobby Dodd Stadium.

Of course, in this most unusual of years, there's a chance they could return in 2021.

The NCAA has granted athletes an extra year of eligibility because of the coronavirus pandemic, adding another level of uncertainty to a season filled with all sorts of twists and turns.

“I'm really just focusing on finishing out the season strong," said Yellow Jackets defensive lineman Djimon Brooks, a fifth-year senior. ”I'll get a chance to sit down and talk with the coaches and my parents after the season. I haven't really even gotten that far with it.”

Georgia Tech (3-6, 3-5 Atlantic Coast Conference) will host Pittsburgh (5-5, 4-5) on Thursday night in a game that was supposed to be held Nov. 14, only to be postponed because of the pandemic.

“It’s one day at a time,” Pittsburgh coach Pat Narduzzi said. “If you go through a good day, you’re like, ‘Man, we got through a good day.’ You know tomorrow there’s going to be something that hits you square in the mouth.

"How many more days left in this year?”

Some things to watch for when — or maybe "if" would be more appropriate — the Panthers finally face the Yellow Jackets:

Win or lose its final regular-season game, Pittsburgh is likely in the mix for a bowl spot after the NCAA waived the six-victory threshold for teams to become bowl eligible.

Narduzzi indicated Pitt would accept a bid if offered, but conceded the six-month slog since players returned to campus has taken its toll because of the restrictions put in place during the pandemic.

“I know our kids and kids across the country are itching to have a little family time,” the coach said. “I know that, especially around the holidays. Bowl season is never easy on our kids ever, and it will be even harder when we (said) you can't go home for Thanksgiving, you can’t go see your parents. ... It’s not an easy time for anybody.”

After going four weeks between games, Georgia Tech is now in a stretch of three contests in 15 days.

The Yellow Jackets, who are set to finish the season Dec. 19 at Miami in another makeup game, are dealing with a depleted roster because of injuries, opt-outs and other issues.

For instance, only four linebackers were listed on the team's above-the-line chart, which indicates who will play against the Panthers.

“We don't make excuses around here,” coach Geoff Collins said. “We just play the situation that we're in right now.”

Pitt senior quarterback Kenny Pickett’s career began audaciously when he engineered an upset of then No. 2 Miami as a freshman in the 2017 regular- season finale.

While the Panthers have struggled over the last three years to match that giddy emotional high, Pickett has put together a solid resume that could help him land an NFL roster spot next summer.

Pickett is fifth on Pitt’s all-time yards passing list and fourth in total offense (8,327 yards), slipping by Hall of Famer Dan Marino in a 52-17 loss at Clemson on Nov. 28. This season, he came the first Pitt quarterback to put put up two 400-yard passing games.

Pickett has proven to be dangerous with his legs too. Pitt’s running game has basically disappeared over the last two years, at times leaving the quarterback as the most viable option out of the backfield.

While it's been another tough season for the Yellow Jackets, senior punter Pressley Harvin III is a bright spot.

Harvin is one of 10 semifinalists for the Ray Guy Award as the top punter in the country. He leads the ACC and is third nationally with an average of 47.7 yards.

Adonicas Sanders is coming off a career-day in last Saturday's loss at North Carolina State. The junior had seven catches for 105 yards — the first Georgia Tech receiver to reach 100 yards in an ACC game since 2015.

“It was a great feeling getting that many touches,” Sanders said. “I always wanted to have a 100-yard receiving game.”