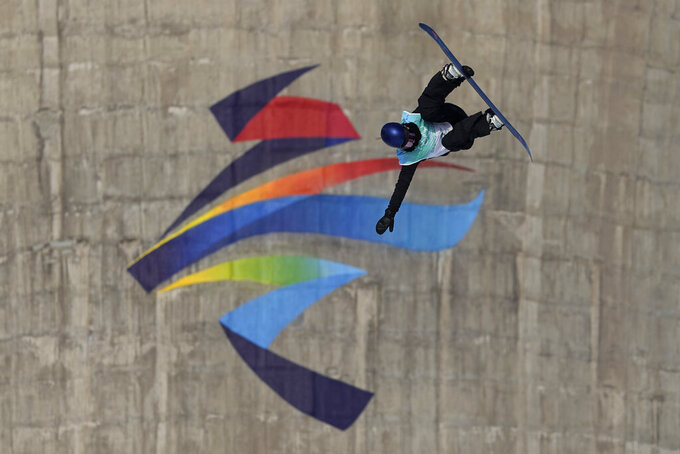 BEIJING (AP) — Anna Gasser hardly felt like the favorite in Beijing, even as the only woman to ever win an Olympic snowboarding big air contest.

The way her competition — with an average age of 21 — has been pushing the sport's boundaries, the 30-year-old from Austria wasn't even sure that her best would be good enough for the podium.

“This one is more emotional to me, because it's so unexpected,” she said.

Sadowski Synnott led Gasser by 0.25 points entering the third round after both landed a pair of double cork 1080s — two off-axis flips with three rotations.

Gasser was assured of at least silver when she dropped in switch for her final attempt at Big Air Shougang. She was the first woman to land a cab double cork 1260 when she did it 2019, and she did it again here, the only rider to stomp out a trick with 3 1/2 spins.

“I didn’t care about the 0.25,” Gasser said. “I cared about the best snowboard tricks I could show.”

A former gymnast who began snowboarding only at 18, Gasser dominated the international circuit ahead of the Pyeongchang Games four years ago and expected nothing less than gold when big air debuted there.

The sport seemed to grow past her after that. She has only one World Cup victory since the start of 2019, while a cadre of high-flying girls and young women have pushed snowboarding to new heights.

Like Sadowski Synnott, a 20-year-old Kiwi dynamo who last week became her country's first Winter Olympics champion when she won gold in slopestyle.

Or 20-year-old Reira Iwabuchi of Japan, who came oh-so-close Tuesday to landing the first triple cork — three off-axis flips — ever in a women's competition.

Or, of course, 17-year-old bronze medalist Kokomo Murase of Japan, who four years ago became the youngest girl ever to compete at Winter X Games — and won.

The oldest rider in the finals by five years, Gasser remains the only one with an Olympic big air title.

“They have so many more years to come, you know?” she said with a laugh. "I love riding with the young girls. I love the energy, and those girls pushed me over the last year. They made me a better snowboarder, and without them, without their inspiration, getting inspired by Zoi so much over the last two years, I don’t know if I would do those tricks now.”

Sadowski Synnott followed Gasser in the final round and tried her own 1260, but she couldn't hit the landing. She adds a silver to her slopestyle gold and a big air bronze from 2018, making her the seventh snowboarder with three Olympic medals, on a list that includes Shaun White and Jamie Anderson.

Moments before Gasser took the lead, Iwabuchi nearly upended the sport with her try at a triple cork. She briefly appeared to have it landed before spinning out halfway down the landing. Her competitors still erupted in excitement, swarming her at the bottom of the jump as she waited for the judges' scores. She got only 37 points and ended up in fourth.

Gasser watched Iwabuchi's triple cork from atop Big Air Shougang, where she said everyone “freaked out.”

“She went for progression and not for the medal today,” Gasser said. "She could have played it safe and maybe been on the podium, but she went all out.

“I hope she gets the same attention from this ride that she would have got for a medal.”