Georgia keen to prove it belongs in Autumn Nations Cup 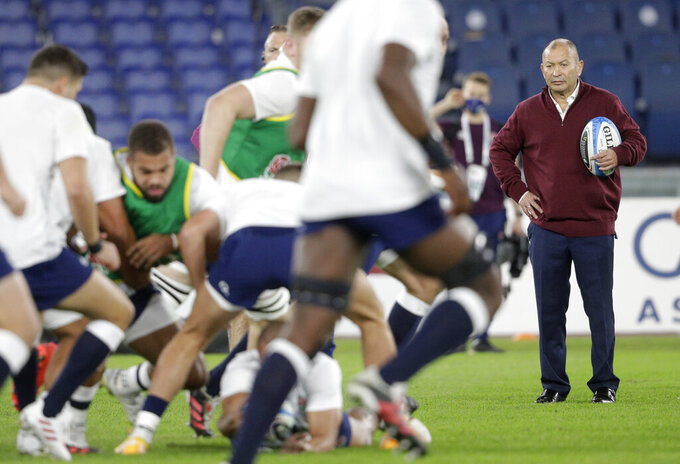 England's head coach Eddie Jones, right watches his players during the warm up ahead of the Six Nations rugby union international match between Italy and England at the Olympic Stadium in Rome, Italy, Saturday, Oct. 31, 2020. (AP Photo/Gregorio Borgia)

LONDON (AP) — Georgia vows to have learned its lessons from the abysmal effort against Scotland at Murrayfield last month.

The Lelos can't afford not to. The best team in Europe outside of the Six Nations faces the new Six Nations champion -- England -- at an empty Twickenham on Saturday in the Autumn Nations Cup opener for both.

The signs, though, are ominous for the Georgians, who also have Wales and Ireland lined up this month in their pool.

Only three weeks ago, Scotland hammered Georgia 48-7 in a warmup for both teams, their first since the pandemic shut down sports in Europe in March.

Georgia gave up three tries to the Scots from lineout mauls, and a fourth try was disallowed because the grounding was unclear. The first try conceded in the match came from a quick tapped penalty while half the Georgians had their backs turned. The pack, normally gritty, was uncharacteristically shaky.

"The game showed that we have to work on the areas which previously were considered as our strengths,” France-based No. 8 Beka Gorgadze said.

"Mostly, we lacked confidence in the contact area. Our attack and defending the maul was bad, too.

"We have to be clinical and play better in the areas where we played poor against Scotland. If we can do this then I am sure we will have a better result, even considering that our opponent is England.

"Logically, our most important game is probably in the finals round, so we will be aiming for that one, hoping for victory.”

After Scotland, the Georgian-based players went back to their clubs because a scheduled European championship game against Russia on Nov. 1 was postponed again due to COVID-19. The team arrived in England on Sunday and health protocols prevented them from training until Thursday.

While the virus has hindered the Lelos' buildup, it is also responsible for them being in the tournament. They replaced Japan, who withdrew in August.

The tournament offers precious matches for Georgia against tier one sides. Since 2010, the Lelos have played 16 tier one teams, only nine outside of the Rugby World Cup. They have never beaten a tier one side. Against England, Wales and Ireland they are a combined 0-8.

So the tournament is about regaining respect, proving they deserve these matches and can be competitive against the big guns, starting with a rare match against England. They have previously met only at Rugby World Cups, where England won in 2003 in Perth 84-6, and in 2011 in Dunedin 41-10.

Even in a Twickenham closed to spectators, England is expected to win quite comfortably on Saturday.

Coach Eddie Jones has used the occasion to make nine changes to the starting XV which beat Italy 34-5 two weeks ago in Rome to win the Six Nations.

He's excited about debuting Wasps flanker Jack Willis, who swept the English season awards. Willis was picked for the 2018 tour of South Africa but withdrew injured.

“Jack has got a good nose for the ball,” Jones said. "He gets himself into good positions. He's got good natural strength -- he's not a gym-strength person -- and he's flipping tough.

"Turnovers are the highlight part of his game.”

A second newcomer, Bristol utility Max Malins, is in the reserves to cover the back three.

England will be better for having Italy under its belt, and Georgia's eyes have been opened by Scotland at the level they quickly need to rise to just to be competitive. The Lelos are debuting left wing Sandro Svanidze among eight changes.

"We will be (at the Autumn Nations Cup) not just to make up the numbers,” Georgia captain Merab Sharikadze said.

"We promise that nobody will spare themselves. There might be some technical flaw in our game, and the result might be undesirable, but anything can happen on the day.”