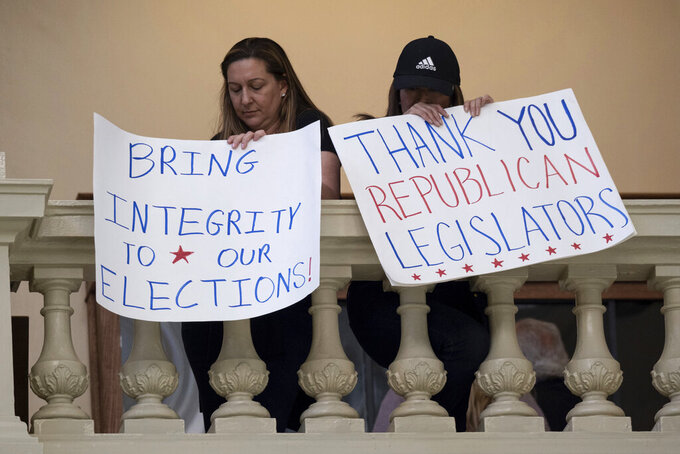 Protesters in favor of changes in Georgia's voting laws hold signs inside the State Capitol in Atlanta, Ga., as the Legislature meets Monday, March 8, 2021, in Atlanta. (AP Photo/Ben Gray) 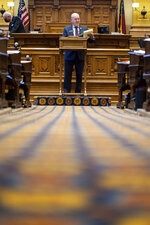 The bill is likely headed to a Senate-House conference committee where the chambers will hash out their difference on the issue. That could mean significant changes before the two chambers vote again on whether to agree to a compromise bill.

Senate Bill 241 would limit absentee voting to people 65 and older, those with a physical disability and people who will be out of town on Election Day — ending broad no-excuse absentee voting introduced by the Republican-led legislature in 2005. It would also require an ID for those who are able to vote absentee, among many other changes.

The bill passed the state Senate 29-20 in a vote that fell along party lines. Bills must get at least 29 votes for a majority in the 56-member Senate.

The bill is part of a flood of legislation introduced by Republicans across the country that would restrict voting access after President Joe Biden beat former President Donald Trump in November. Many of the proposals being floated target absentee voting after Trump repeatedly made false claims about fraud in mail voting.

Republican Senate Majority Leader Mike Dugan, the chief sponsor of the bill, said a surge in absentee ballots during the last election cycle caused a burden on county election offices. More than a million Georgians used the option in November as the coronavirus pandemic raged.

“The increasing burden on local election offices and the increased cost to each of our counties has risen significantly,” Dugan said. "In recent years the number of mail-in absentee ballots has increased to the point where counties are in essence running three elections simultaneously.”

Dugan said about 2.7 million Georgians would still be eligible to vote absentee under the specific excuses outlined in the bill.

Democrats in the chamber said the bill is a direct reaction to Trump's lies about fraud and would disproportionately affect voters of color.

“The purpose of 241 and all of the vote-limiting bills that we have before us is to validate a lie,” Democratic Sen. Nikki Merritt said. "It is to prevent massive voter turnout from happening again, especially in minority communities, our new voters who are turning 18 and hard-working Georgians.”

The Senate did not vote on a separate proposal that would end automatic voter registration when a person gets a driver’s license Monday, the deadline for bills to get passed by one chamber in order to remain alive for the session. But there are procedural ways to resurrect a proposal, and the idea could pop back up in a conference committee.

The Senate action comes as a task force convened by Georgia’s secretary of state expressed concern that the legislation is being rushed.

Members of the group formed by Republican Secretary of State Brad Raffensperger released a statement Monday saying “the legislative process is proceeding at a pace that does not allow full examination of all factors that must be considered.”

“There is a need for responsible elections policymaking to be deliberate and evidence-based, not rushed,” the statement continues. “When we see proposals that properly balance voter access with integrity, we will voice support.”

Twelve members of the task force signed off on the statement, which specifically noted that three other members were not included.

Georgia's House has already passed a wide-ranging election bill backed by Republicans. The House bill would require a photo ID for absentee voting, limit the amount of time voters have to request an absentee ballot, restrict where ballot drop boxes could be located and when they could be accessed, and limit early voting hours on weekends.

The latter provision has raised concerns among voting rights groups who say the proposal seems targeted at hampering Sunday voting — a popular day for Black churchgoers to vote in “souls to the polls” events.

Republican Gov. Brian Kemp has endorsed the idea of requiring a photo ID for absentee voting but has yet to back any specific proposals. Raffensperger says he favors ending no-excuse absentee voting as well as requiring an ID for mail voting.