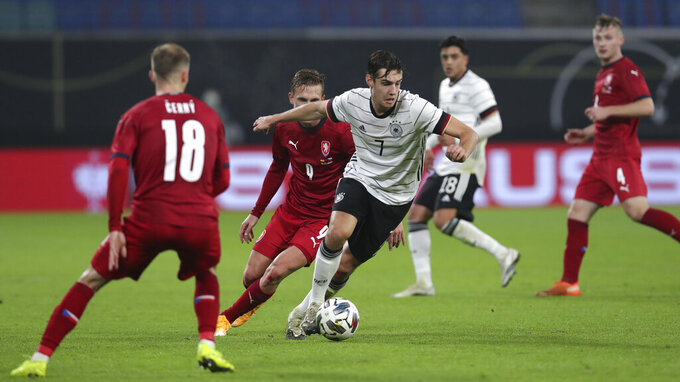 DÜSSELDORF, Germany (AP) — Even when the German national team wins, it can lose.

Germany beat the Czech Republic 1-0 in a friendly on Wednesday but the average domestic TV ratings came in below “Cash for Rarities," a show about selling antiques. The average audience of 5.42 million was the lowest for a prime-time men's national team game this century.

That's unsettling for a country which prides itself on its passionate fan culture. The joy from winning the World Cup in 2014 turned to despair during Germany's group-stage exit in 2018. Now apathy reigns amid a mediocre Nations League campaign.

Part of the problem on Wednesday was that the team was anything but antique.

Germany coach Joachim Löw picked a youthful squad and gave seven regulars, including Manuel Neuer and Toni Kroos, time off to recover before upcoming Nations League games. New faces like PSV Eindhoven defender Philipp Max and Wolfsburg wing back Ridle Baku don't have the same profile, and the selection was widely described as a “B team” in German media.

Löw is devoted to rebuilding ahead of next year's postponed European Championship, and that has caused friction within Germany.

He dropped the World Cup-winning trio of midfielder Thomas Müller and defenders Jerome Boateng and Mats Hummels in March 2019 and has remained steadfast about not selecting them again, even though Müller won the Champions League last season and broke the Bundesliga record for assists. Results are middling, with three draws in the last four Nations League games.

“It really hurts me how the young players are treated. I notice it hovering over the team like a dark cloud,” Germany team director Oliver Bierhoff said Monday in a plea for more trust in the rebuild.

Coaches including Löw have warned that top players risk injury from playing too many games amid the coronavirus pandemic, making the empty-stadium friendly against the Czechs seem incongruous.

The Nations League, too, is part of the problem. UEFA's newest competition has caught on in some markets — notably England, which reached the semifinals last year — but not in Germany. The team finished last in its Nations League group in 2018-19 and was set to be relegated but got a reprieve when UEFA changed the format. Little wonder that some fans feel it's a low-stakes competition.

Ahead of Wednesday's friendly, Kroos criticized soccer's new competition on a podcast he hosts with his brother. He didn't mention the Nations League by name, but he made the comments only days before Germany's games against Ukraine on Saturday and Spain on Nov. 17.

“We players are just the puppets of FIFA and UEFA with all these additional (competitions) that are invented," Kroos said. "Nobody is asked."