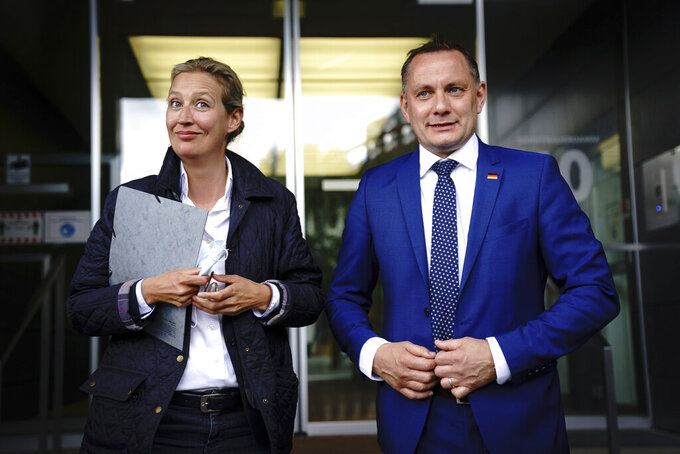 Alice Weidel, left, co-leader of the AfD parliamentary group in the Bundestag, and Tino Chrupalla, co-party leader, introduce themselves as the party's top candidates for the German parliament election in fall at a news conference in Berlin Tuesday, May 25, 2021 . (Kay Nietfeld/dpa via AP)

BERLIN (AP) — The far-right Alternative for Germany has chosen two representatives supported by the hard-right wing of the party to lead it into the upcoming national election.

The party announced Tuesday that 71% of members in an online poll voted for co-chairman Tino Chrupalla and parliamentary co-leader Alice Weidel, beating a rival duo from the more moderate wing of the party.

Alternative for Germany, also known by its acronym AfD, has drifted steadily to the right since its founding in 2013, drawing increasing scrutiny from the country's domestic intelligence agency.

Recent polls suggest the party can hope to match its 2017 election result, when it got 12.6% of the vote after campaigning heavily against immigration. It is currently the largest opposition party in parliament.

Weidel said AfD would focus its campaign on the impact that the coronavirus pandemic has had on the economy, claiming that measures introduced to curb the spread of the virus were “excessive.”

Germany's restrictions were less strict than those in many of its European neighbors and it had fewer deaths per capita than other large countries such as France, Italy, Spain or Britain.