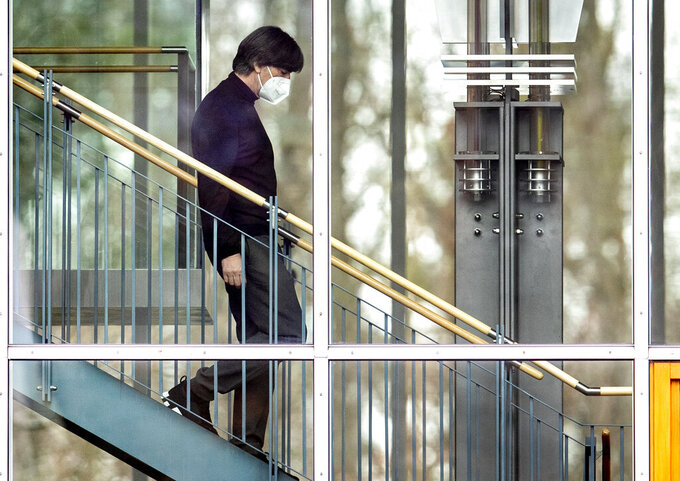 The head coach of the German national soccer team, Joachim Loew, walks down stairs prior to a virtual press conference at the DFB headquarters in Frankfurt, Germany, Thursday, March 11, 2021. Two days ago Loew announced to step back from his post after the European Championships. (AP Photo/Michael Probst)

BERLIN (AP) — Given time during the coronavirus pandemic to reflect, Germany coach Joachim Löw decided to step aside earlier than expected.

“I always said that the team needs room, it needs time and development. It shouldn’t be held up because the coach perhaps wants to cling onto his position,” Löw said on Thursday in his first public comments since the decision was announced by the German federation on Tuesday.

The 61-year-old Löw said leaving after the European Championship this summer, instead of after the World Cup next year, will give his successor the time to prepare for Euro 2024 in Germany.

“Three years to prepare for a tournament in your own country is right,” Löw said at an online press conference.

Löw took over Germany after serving as assistant coach to Jürgen Klinsmann at the 2006 World Cup, and is one of the longest-serving coaches of a national team. He has been in charge for 189 games.

“Fifteen years as a national coach is of course a long time in the fast-moving soccer business. An eternity, nowadays,” Löw said.

He led Germany to the 2014 World Cup title, but has been under increasing scrutiny as results suffered following a shake up of the team after the 2018 World Cup, which Germany exited in the first round.

“I think it was completely the right decision to start changes in 2019,” Löw said. “This young generation will reach their potential in 2024.”

Löw’s team was humiliated in its last game, a 6-0 defeat to Spain in November, but he said this had no influence on his decision to leave.

“Last year I'd already planned on proper reflection in February and March. For example, where are we? Where am I? What do I want? What have I got? A feeling for the future? And I came to the conclusion that it was time after the summer and this European Championship to pass the baton on to another coach.”

Löw said his “full concentration” was on preparing the team for the championship.

“I'd never rule anything out,” Bierhoff said with a smile. “So you can keep speculating.”

DFB president Fritz Keller said he was grateful “because Jogi has given us the time to calmly and carefully prepare the successor. We've already commissioned Oliver Bierhoff to probe. We've all the time in the world.”