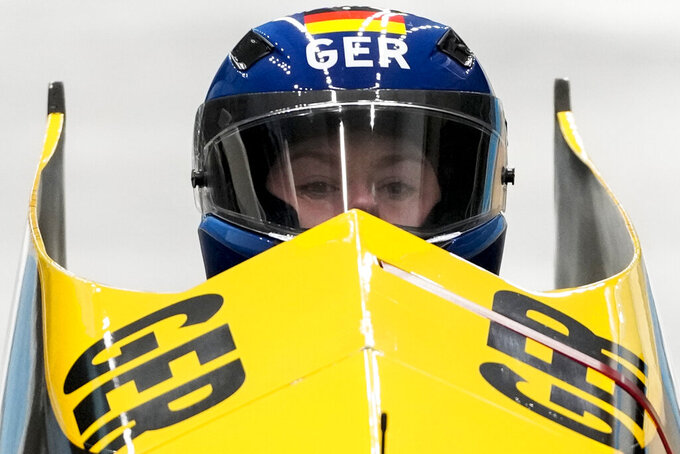 Laura Nolte and Deborah Levi, of Germany, slide during the women's bobsleigh heat 1 at the 2022 Winter Olympics, Friday, Feb. 18, 2022, in the Yanqing district of Beijing. (AP Photo/Mark Schiefelbein)

Winners of gold medals in seven of the eight sliding events so far at the Beijing Games, Germany has put itself in prime position to add more hardware to its record-setting total — holding down the top two spots at the midway point of the women’s bobsled competition Friday night.

Laura Nolte and Deborah Levi have a commanding half-second lead after two runs, with a combined time of 2:02.05. Defending Olympic champion Mariama Jamanka and Alexandra Burghardt are second, in 2:02.55.

“Today was a really good show," Nolte said. “We have to do the same tomorrow."

And the U.S. is third, with four-time medalist Elana Meyers Taylor and brakeman Sylvia Hoffman finishing their first two runs in 2:02.79 — well ahead of Canada's Christine de Bruin, who posted a two-run time with brakeman Kristen Bujnowski of 2:03.21.

“I'm just going to go out there and have fun tomorrow," said Meyers Taylor, who has hinted that she may retire after these Olympics. “It's been a long journey and I'm just going to enjoy the heck out of it. I feel really good right now. I'm going to go get some rest and get after it tomorrow. It's a whole new day tomorrow."

Monobob gold medalist Kaillie Humphries, seeking a fifth Olympic medal and fourth gold, has some work to do. Teaming with brakeman Kaysha Love, Humphries is fifth at the midway point in 2:03.38 — nearly six-tenths of a second away from what currently is the bronze position.

“Kaysha did an amazing job today," Humphries said. “We'll look again at our equipment, look to clean up some drives and see what happens. ... We go out there and we do the best that we can do. Sometimes it's not good enough and sometimes it is."

The final two runs of the event are Saturday night.

It's no surprise to see those nations at the top of the standings. The U.S., Germany and Canada have combined to win 14 of the previous 15 Olympic medals awarded in the event; Italy is the exception, winning bronze in 2006.

Germany's seven sliding golds already at these Olympics is a record for any nation, and its 12 medals — and counting — ties what East Germany and West Germany managed in 1976.

Germany went 4-for-4 in luge events at these Olympics, then 2-for-2 in skeleton and swept the medals in the two-man bobsled race. The only gold from the Yanqing Sliding Center that hasn’t gone to Germany so far was in women’s monobob, when Humphries won and Meyers Taylor was second for the U.S.

That may be the lone blip on the German sliding resume from these games, with Nolte leading this event and reigning world champion Francesco Friedrich the big favorite in the four-man event that begins Saturday morning.

Nolte set the tone, leading after the first run Friday night with Jamanka — the defending Olympic champion — only 0.06 seconds behind. Meyers Taylor was third, Humphries fourth at that point, the first-to-fourth gap being 0.37 seconds.

It opened up considerably in the second heat, as Nolte pulled away.

“My runs weren't perfect and especially in the second run I had some mistakes," Jamanka said. “That's more on my mind than the position we are in. ... We have some stuff to do."

The order atop the standings largely stayed the same in the second heat, the only change being de Bruin passing Humphries in the race for fourth.

“We are battling some tough competition with starts, with technology, with German technology in sleds," Humphries said. “It's definitely a challenge, but having a competitive field in the women's sport is exciting. And we're not about to give up just yet. Anything can happen and we'll fight until the bitter end."

The only big mover in the second run was Russian Nadezhda Sergeeva, who was 16th in the first heat but climbed to ninth at the midpoint.