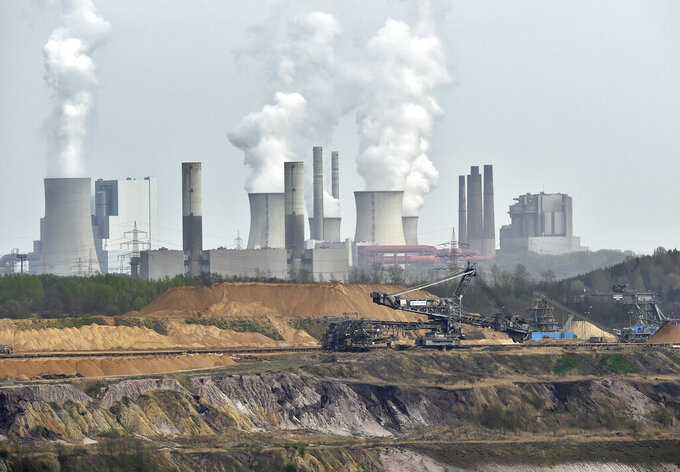 FILE - In this April 3, 2014 file photo giant machines dig for brown coal at the open-cast mining Garzweiler in front of a smoking power plant near the city of Grevenbroich in western Germany. World leaders breathed an audible sigh of relief that the United States under President Joe Biden is rejoining the global effort to curb climate change, a cause that his predecessor had shunned. ﻿ (AP Photo/Martin Meissner, File)

Peter Altmaier said figures show Germany's emissions of planet-heating gases were 42% lower in 2020 than three decades ago, confounding warnings that the country couldn't meet its goal.

While the coronavirus pandemic helped reduce emissions, Altmaier said the target might have been achieved anyway even without the drop in economic activity because of the lockdown.

Altmaier said the figures proved those wrong who had doubted the country would meet its goal. “We have now achieved it, not just because of corona but because emissions trading worked,” he said.

Companies in the energy and industrial sectors are allocated a certain number of emissions in Europe. These can either be used or sold, providing a financial incentive to reduce emissions. Starting this year, Germany also introduced a national emissions trading systems for the heating and transport sectors.

German Chancellor Angela Merkel has backed a target to reduce emissions across the European Union to ‘net zero’ by 2050, meaning the amount released into the atmosphere can't be greater than the amount captured again by natural or artificial means. Scientists say achieving that goal will help prevent global temperatures from rising more than 2 degrees Celsius (3.6 Fahrenheit) by the end of the century compared with pre-industrial times.

Separately, the German government agreed Wednesday to increase the share of renewable fuels in the transport sector to 28% over the next decade — double the target set by the European Union as a whole. Greenhouse gas emissions in Germany's transport sector have hardly declined since 1990 as more and cars cars hit the road, outweighing the effect of more efficient engines.

The government's plan, which needs to be approved by parliament, includes incentives for the use of electric cars, hydrogen and biofuels made from renewable sources.

Environmental groups said that the plan only requires the phaseout of palm oil for biofuels by 2026. Palm oil currently makes up a fifth of the biofuel used in Germany.

Airlines will be required to use at least 2% synthetic kerosene by 2030.