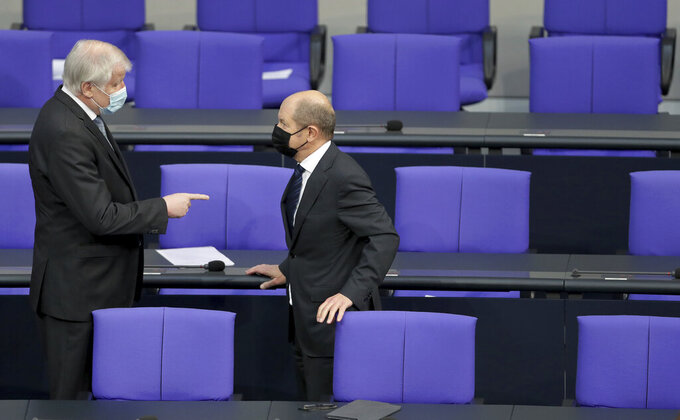 German Interior Minister Horst Seehofer, left, and German Finance Minister Olaf Scholz, right, talk as they arrive for a meeting of the German federal parliament, Bundestag, at the Reichstag building in Berlin, Germany, Wednesday, Jan. 13, 2021. One topic of the meeting are the current developments of the new coronavirus pandemic in Germany. (AP Photo/Michael Sohn)

After six years in the black, Germany resorted to running up new debt in 2020 to help cover the cost of huge support packages made necessary by the coronavirus pandemic and an expected shortfall in tax revenue. The country has Europe's biggest economy.

Parliament had authorized 217.8 billion euros in new borrowing. In the end, the economy suffered less than feared in 2020; the national statistics office said last week that gross domestic product declined by 5%, ending a decade of growth but still a better outcome than long expected.

“Germany is in comparatively good shape because we acted quickly and strongly in the budget,” Finance Minister Olaf Scholz said in a statement.

“We used a lot of money to protect health, support business and secure employment,” he added. “That pays off in multiple ways. The economic development is better, job losses are smaller, tax income is higher and new borrowing significantly lower than was forecast at times.”

Critics say that aid has been too complex and flowed too slowly. Germany was able to relax restrictions relatively quickly after last year's first phase of the pandemic, but has struggled to deal with the autumn and winter resurgence of infections.

Restaurants, bars, leisure and sports facilities were closed Nov. 2 in a partial shutdown that halted a rise in infections for a while but didn't bring them down. On Dec. 16, nonessential shops and schools were closed. That lockdown is expected to continue into February.