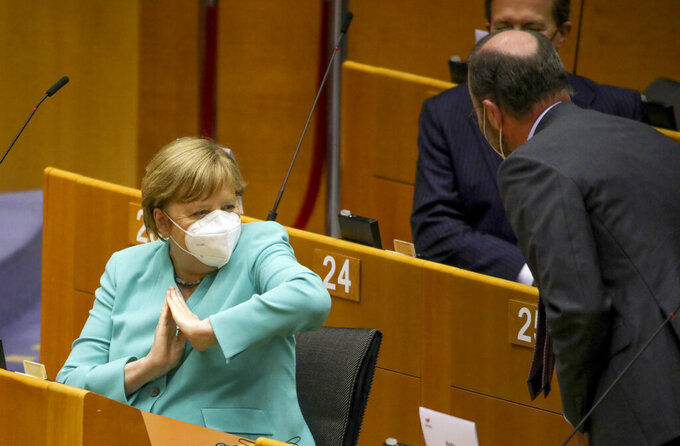 German Chancellor Angela Merkel, left, offers an elbow to gesture hello as she attends a plenary session at the European Parliament in Brussels, Wednesday, July 8, 2020. Germany has just taken over the European Union's rotating presidency, and must chaperone the 27-nation bloc through a period of deep crisis for the next six months and try to limit the economic damage inflicted by the coronavirus. (AP Photo/Olivier Matthys)

BRUSSELS (AP) — The coronavirus pandemic is showing the limits of “fact-denying populism,” German Chancellor Angela Merkel said Wednesday, as she urged European Union countries to quickly agree on a major economic recovery package and deprive nationalists of any opportunity to take advantage of the crisis.

The virus has killed more than 100,000 people in the 27 EU nations. It sparked what is likely to be the worst economic crisis in Europe in almost a century, according to the European Commission, after the disease ravaged health care systems and forced the closure of businesses, transport systems and schools.

Merkel's remarks to the European Parliament came as the leaders of Italy and Spain — the first EU countries to impose far-reaching lockdowns and two of the worst-hit countries in the world — urged fellow EU members to agree at a summit next week on “ambitious terms” for the recovery fund to help get economies back on track.

“The depth of the economic decline demands that we hurry,” Merkel told lawmakers. “We must waste no time — only the weakest would suffer from that. I very much hope that we can reach an agreement this summer. That will require a lot of readiness to compromise from all sides — and from you too.”

Germany took over the task of chairing EU meetings on July 1 and faces the daunting challenge of seeking a compromise on the coronavirus recovery fund worth as much as 750 billion euros ($850 billion). Berlin must also help chaperone through a European budget for the next seven years, which will be linked to the recovery fund, to confront the recession.

“We must not be naive: In many member states, opponents of Europe are just waiting to misuse the crisis for their ends,” Merkel said. “We must show them all where the added value of cooperation in the European Union lies. We must show that a return to nationalism means not more, but less control.”

Without explicitly naming any countries or politicians, Merkel pointed to cautionary examples elsewhere.

“We are seeing at the moment that the pandemic can’t be fought with lies and disinformation, and neither can it be with hatred and agitation,” she said.

“Fact-denying populism is being shown its limits,” she added to applause. “In a democracy, facts and transparency are needed. That distinguishes Europe, and Germany will stand up for it during its presidency.”

Merkel and French President Emmanuel Macron in May proposed creating a one-time 500 billion-euro ($563 billion) recovery fund that would be filled through shared EU borrowing. That is a big step for Germany, breaking with its long-standing opposition to any kind of joint borrowing.

The EU’s executive commission expanded on the proposal, putting forward plans for a 750 billion-euro fund made up mostly of grants. It faces resistance from countries dubbed the “Frugal Four” — Austria, Denmark, the Netherlands and Sweden — that oppose grants and are reluctant to give money away without strings attached.

“It is right and important for the regions particularly hard hit by the crisis, and above all the people who live there, to be able to count on our solidarity,” Merkel said Wednesday. “It is in our very own interests — but at the same time, that also means the effort that is necessary for the good of all must not overburden the economically strong member states in a one-sided way.”

Merkel is scheduled to hold talks with Dutch Prime Minister Mark Rutte in Berlin on Thursday.

In Madrid, Italian Prime Minister Giuseppe Conte exhorted his European partners to be bold in their response to the pandemic or risk endangering the bloc's common market and economy.

“If we end up going for the most diluted option, that would be an erroneous approach because it wouldn’t help any country at all,” Conte told reporters after meeting with his Spanish counterpart, Pedro Sánchez. “Europe must give an ambitious political response.”

Southern European countries are pressing for a no-strings-attached approach to the recovery fund at the summit in Brussels on July 17-18. That will be first in-person meeting of the bloc's leaders since the outbreak hit the continent.

Sánchez, said that the planned fund could be “historic” and comparable to the significance of the EU’s foundation or the establishment of the euro single currency. He said consensus among EU leaders was needed no later than this month.

“Recovery and unity are two faces of the same coin,” Sánchez said. “Without unity, there will be no recovery, it’s important that we convey that to our European partners.”

Moulson reported from Berlin. Aritz Parra in Madrid contributed to this report.