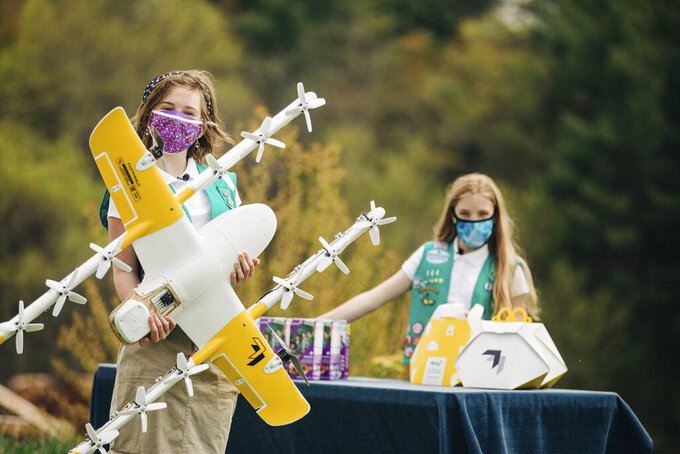 In this April 14, 2021 image provided by Wing LLC., Girl Scouts Alice, right, and Gracie pose with a Wing delivery drone in Christiansburg, Va. The company is testing drone delivery of Girl Scout cookies in the area. (Sam Dean/ Wing LLC via AP)

Missing out on Thin Mints in the pandemic? A Google affiliate is using drones to deliver Girl Scout cookies to people's doorsteps in a Virginia community.

The town of Christiansburg has been a testing ground for commercial delivery drones operated by Wing, a subsidiary of Google's corporate parent Alphabet.

Now the company is adding the iconic boxed cookies to the more mundane drugstore offerings, FedEx packages and locally-made pastries, tacos and cold brew coffees it's been hauling to a thinly populated area of residential subdivisions since 2019.

Wing said it began talking to local Girl Scout troops because they’ve been having a harder time selling cookies during the pandemic, when fewer people are out and about. The organization jumped on the new twist to its skills-building mission.

“I’m excited that I get to be a part of history," said 11-year-old Gracie Walker, of the Girl Scouts of Virginia Skyline Troop 224. “People are going to realize and be, like, ‘Hey, this is better for the environment and I can just walk outside in my pajamas and get cookies.'"

It’s the latest attempt to build public enthusiasm for futuristic drone delivery as Wing competes against Amazon, Walmart, UPS and others to overcome the many technical and regulatory challenges of flying packages over neighborhoods.

Federal officials started rolling out new rules in mid-April that will allow operators to fly small drones over people and at night, potentially giving a boost to commercial use of the machines. Most drones will need to be equipped so they can be identified remotely by law enforcement officials.

The 10-pound Wing drone that made the first deliveries in Christiansburg in fall 2019 is already an artifact held at the Smithsonian National Air and Space Museum. Whether it will go down in history as a revolutionary innovation or a utopian flop remains to be seen.

Amazon has also been working on drone delivery for years. In 2013, Amazon founder Jeff Bezos said in a TV interview that drones would be flying to customer’s homes within five years, but that deadline has long since passed. The company did win government approval to deliver packages by drones last August, but Amazon said it was still testing them and hasn’t started delivering goods to shoppers yet.

David Vos, an aerospace engineer who led Google’s Wing project until 2016, said he has been surprised that drone delivery ventures haven’t taken off more quickly.

“I thought it was completely doable to be up and going by 2021,” Vos said. While he still thinks drone technology is getting closer to delivering the size, weight and power needed to transport goods safely in populated places, Vos said the tech industry also needs a cultural shift.

In particular, he said, it needs to bring on people from the traditional aviation industry who have experience building “safety-critical systems” that meet strict performance standards.

Wing's drones are able to navigate autonomously — without a human pilot controlling them remotely — and are powered by two forward propellers on their wings and 12 smaller vertical propellers. When a drone reaches its destination, it hovers above the front lawn as a tether releases to drop the package.

“It was so smooth and it didn’t shake," said Walker, who, before her troop added drones to its sales strategy, would don a mask and set up a cookie booth outside a home improvement store. “They look like a helicopter but also a plane."

There's not much evidence that consumers have been clamoring for drone delivery, and many have expressed privacy, safety or nuisance concerns when asked to imagine the noisy machines over their homes. Wing has objected to some of the FAA's new drone rules on privacy grounds, saying the remote ID requirement could allow observers to snoop on delivery routes online.

But in a small survey of Christiansburg residents by researchers at nearby Virginia Tech that Wing helped fund, most townspeople appeared to be content with the drones.

“One of the reasons is because Virginia Tech is here and there’s an engineering culture of trying new things," said Lee Vinsel, an assistant professor of science, technology and society who conducted the Virginia Tech survey. “And the suburban setup is easiest for drone delivery."

That might not be the case for much denser places, he added. “Manhattan would be tough.”