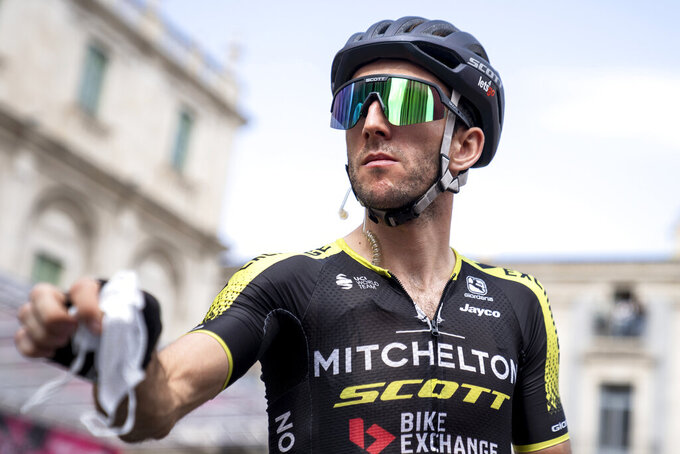 Britain's Simon Yates holds a face mask prior to the fourth stage of the Giro d'Italia cycling race from Catania to Villa Franca Tirrena, Tuesday, Oct. 6, 2020. Overall contender Simon Yates has withdrawn from the Giro d’Italia after testing positive for the coronavirus, his Mitchelton-Scott team announced before the eighth stage, Saturday, Oct. 10, 2020.(Massimo Paolone/LaPresse via AP)

The 28-year-old British rider “developed very mild symptoms” after Friday’s Stage 7, the team said. An immediate rapid test showed a positive result, which was confirmed in a second test.

Yates “was isolated in his single room during the process and is being safely transported by organized ambulance for a period of quarantine where the team can offer its best possible care. His symptoms remain very mild,” the team added.

Yates unexpectedly lost significant time in the climb up Mount Etna during Stage 3 on Monday.

“Simon displayed a very mild temperature on Friday evening during our routine temperature checks, which have been completed three times per day during the course of the Giro,” Mitchelton-Scott team physician Matteo Beltemacchi said. “We immediately requested a rapid test using the services offering by RCS (the race organizers).

“Thankfully his symptoms remain very mild and he is otherwise in good health,” Beltemacchi continued. “All other riders and staff have returned negative results and have been cleared to continue the race, but as a precautionary measure we will monitor the situation closely and undergo further testing in the coming days.”

Yates' withdrawal deprives the race of another contender after Geraint Thomas withdrew after breaking his pelvis in a fall during Stage 3.

Italy recorded one of its highest single-day totals of COVID-19 infections since the start of the outbreak on Friday, adding 5,372 cases and 28 new deaths to its official toll.

The Health Ministry said Friday that northern Lombardy, the onetime European epicenter of the pandemic, added the most new cases at 983.

The race ends Oct. 25 in Milan — the capital of Lombardy.