Gleyber Torres off COVID-19 IL and back in Yankees lineup 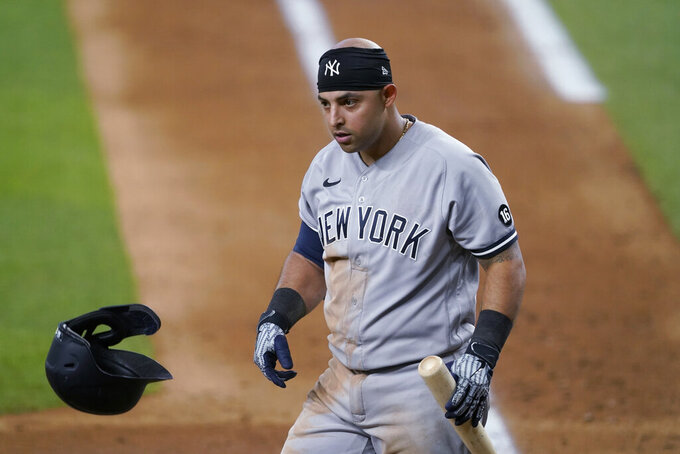 New York Yankees' Rougned Odor tosses his helmet and looks to the dugout after striking out during the seventh inning of the team's baseball game against the Texas Rangers in Arlington, Texas, Tuesday, May 18, 2021. (AP Photo/Tony Gutierrez)

ARLINGTON, Texas (AP) — New York Yankees shortstop Gleyber Torres was back in the starting lineup Wednesday night after being reinstated from the COVID-19 injured list.

Torres, who is fully vaccinated, missed six games after testing positive last week. He was cleared to return by Major League Baseball's joint committee. Asymptomatic vaccinated people can be cleared if they test negative twice.

Torres was batting fifth in the lineup for the third game of a four-game series at Texas.

“It was good to see him walk into the brunch today,” manager Aaron Boone said. "Obviously glad to have him back and good that he’s been able to get out and get a couple of days of work in and over at the complex (in Tampa) yesterday before he flew here. Certainly excited to put him back in the lineup.”

Second baseman Rougned Odor was placed on the paternity leave list. The move came after Odor returned from the injured list after missing 12 games with a sprained left knee. Odor returned Tuesday night in a game against his former team, the Rangers.

Boone said Odor's wife gave birth to a baby girl. The manager said Odor was still in Texas, but was basically up all of Tuesday night.

"Had plans of being here, but decided to stay away with the lack of sleep and everything,” Boone said

Torres, who previously contracted the coronavirus during the offseason, was the only player among nine total positives within the Yankees traveling party since last week, which included three coaches and five staffers. Those coaches and four of the traveling staffers were also breakthrough positives, meaning they tested positive despite being fully vaccinated.