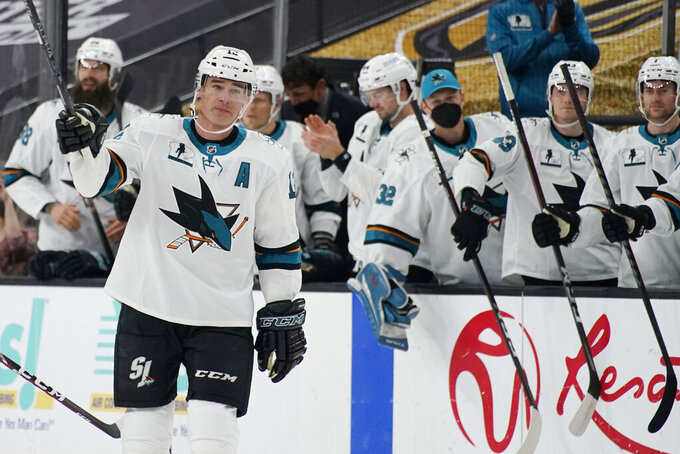 San Jose Sharks center Patrick Marleau (12) waves to the crowd during a small ceremony to mark his passing Gordie Howe for most NHL games played in the first period of an NHL hockey game Monday, April 19, 2021, in Las Vegas. (AP Photo/John Locher)

Alex Tuch scored the winner in a shootout and the streaking Vegas Golden Knights beat San Jose 3-2 Monday as Marleau passed Gordie Howe for the most games played in NHL history.

Robin Lehner stopped 29 shots and the Golden Knights won their seventh in a row, overcoming a two-goal deficit behind a pair of power-play goals from captain Mark Stone.

“It was special,” Stone said. “I think in the moment, you don’t really understand the magnitude of it. When I get home tonight and really reflect on what just happened, I think I’m going to have a big thing of emotion going through me, to be a part of a huge night for (Marleau). No matter the outcome, I think we showed a ton of respect for our opponents, even if it’s a crazy rivalry.”

The 41-year-old Marleau played in his 1,768th career game to break Howe’s record in front of a sold-out crowd of 3,950 that included his wife, Christina, and four sons. That wouldn’t have been possible in San Jose, where fans still aren’t allowed in the arena during the pandemic.

“Just extremely grateful for everything and all the support everyone has given me throughout my career, especially tonight,” Marleau said. “I don’t know how many phone calls or texts I got. It might take me a week to reply to everybody. It’s been overwhelmingly humbling, to say the least.”

After the game, a choked-up Marleau was asked what keeps him coming to the rink.

“I just love it,” he said, wiping away tears with a towel. “There’s nothing else like it.”

Howe played in 1,767 regular-season games and 419 more in the World Hockey Association, the latter of which are not recognized by the NHL.

Martin Jones made 38 saves for the Sharks, including five spectacular game-saving stops in overtime.

Lehner, who denied all three San Jose attempts in the shootout, improved to 8-0-1 since returning from a concussion on March 19.

“We’ve been playing really well lately, and we wanted to keep building, keep everything going. This was an important win for us,” Lehner said. “We stuck with it. The last 10 minutes of the third was a lot of back and forth, same in overtime. It’s a tough schedule for everyone. You’ve got to find ways to win and grind through it. Stoney stepped up, scored two goals.”

Stone was the spark the Golden Knights needed, considering they looked flat on the second night of back-to-back games after playing in Anaheim on Sunday.

The Sharks opened the scoring on Marleau’s historic night when Vegas’ Shea Theodore turned the puck over with a breakout pass along the boards that was gathered by Nikolai Knyzhov, who then fired a shot from the point past Lehner. Just 29 seconds into the second period, it was Noah Gregor corralling a loose pick, spinning and firing from the right circle with a shot that appeared to glance off Lehner’s glove and gave the Sharks a 2-0 advantage.

It didn't last long, though, as Theodore’s wrist shot from the blue line was deflected perfectly by Stone, who was camped at the doorstep and found the top shelf on Jones’ blocker side to cut San Jose’s lead in half.

Stone scored his second goal of the night just seven seconds into another power play, when he scooped the puck around the crease, and Jones, to the far side to tie the game with his 17th of the season.

“Playing the back-to-back, three in four, those are hard stretches,” Stone said. “Coming in you play one shift, the emotion of the fans and the honoring of Patrick. You can get a little wrapped up in it sometimes. We’re trying to find ways to win, that’s what good teams do. You’ve got to find ways to win games in crunch time, and I think we’ve been able to do that in this stretch.”

William Karlsson came close to giving Vegas a 3-2 lead with 14 seconds left, when his wrist shot trickled past Jones, but Sharks defenseman Mario Ferraro was there to slap the puck away as it neared the goal line.

“We know this was the hottest team in the league,” San Jose coach Bob Boughner said. “There was a lot of emotion in this game and a lot on the line. We wanted to make sure we honored Patty the best way we could. That was by playing hard as a team.

“All in all the game was something bigger than just the point and the win. It was a great night to be a part of.”

The teams conclude their two-game series in Las Vegas on Wednesday.