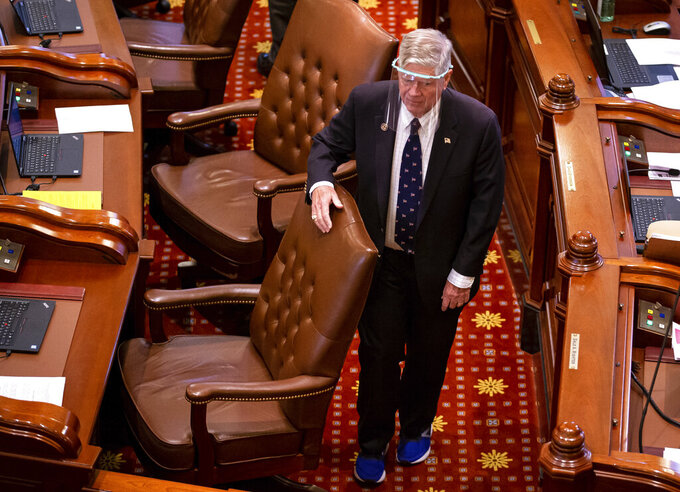 Illinois State Sen. Jim Oberweis, R-Sugar Grove, wears a full face shield while on the floor of the Illinois Senate during session at the Illinois State Capitol, Thursday, May 21, 2020, in Springfield, Ill. (Justin L. Fowler/The State Journal-Register via AP, Pool)

Oberweis Dairy, the North Aurora-based business where Jim Oberweis is chairman, was approved for the Paycheck Protection Program on April 8, according to Treasury Department data.

Oberweis won the March GOP primary to challenge Democratic Rep. Lauren Underwood for a Chicago-area congressional district that is one of Republicans' top targets this fall. The businessman, who also is an Illinois state senator and an investment manager, has loaned his campaign $1.1 million so far this election cycle, according to reports filed with the Federal Election Commission. His campaign has repaid $500,000 of that money, FEC reports show.

Oberweis bought the family business from his brother decades ago. The company operates over 40 ice cream stores and restaurants and has over 1,200 employees, according to his campaign website. The business is currently operated by Oberweis’ son, who is the company president. Oberweis says his role with the company is advisory and he does not receive a salary. His campaign website says his wife also works for the family business.

Oberweis said in a statement Monday the loan was used to pay for salaries and benefits for employees.

“PPP was passed by Congress and signed by the President to save the jobs of millions of workers who were at risk of unemployment or reduced employment because of the forced closure of the economy as a result of COVID-19,” he said. “Oberweis Dairy applied for and was granted PPP funding to save the jobs and paychecks of its employees during this unprecedented time.”

The Treasury Department did not release the exact amount of the loan. A spokesman for Oberweis’ campaign said it was between $5 million and $6 million.

A statement from the company, also released by Oberweis' campaign, said the loan enabled the business to continue operating all of its locations and keep employees working even though many stores saw “swift and significant sales declines.” The statement says Oberweis Dairy has had no closures, layoffs, furloughs, cuts in compensation or forced reduction of hours.

Under the Paycheck Protection Program, also known as the PPP, Congress created $659 billion in low-interest loans that will be forgiven if employers use the money on payroll, rent and similar expenses. The statement from Oberweis Dairy says all of the money the company received was used “as the PPP program was designed.”

Oberweis Dairy is among more than 27,000 Illinois businesses that received loans of $150,000 or greater through the program, according to Treasury Department data. Nationally, about 650,000 mostly small businesses and nonprofits received loans, which economists have credited with helping prevent an even greater loss of jobs due to COVID-19-related shutdowns.

With about $130 billion unclaimed as the application deadline closed June 30, Congress extended the program until Aug. 8.The public may never know the identity of more than 80% of the nearly 5 million beneficiaries to date because the administration has refused to release details on loans under $150,000.

That secrecy spurred an open-records lawsuit by a group of news organizations, including The Associated Press. Still, the release of the data is the most complete look at the program’s recipients so far.