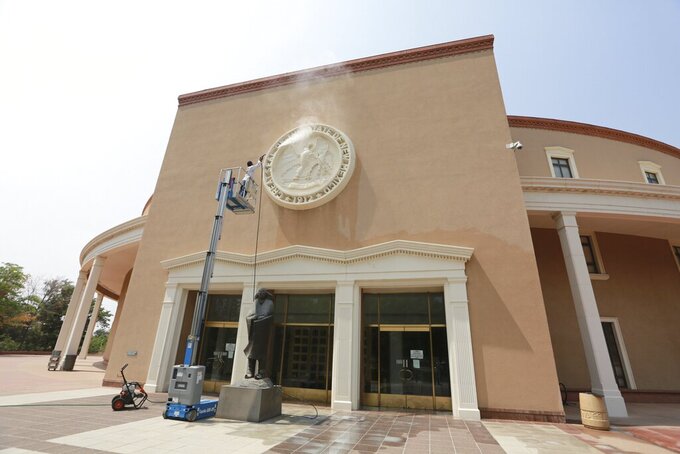 A maintenance worker power-washes the state seal at an entrance of the capitol building on Monday, Aug. 24, 2020, in Santa Fe, New Mexico. The building has been closed to the public since the onset of the coronavirus pandemic. Legislative meetings and gubernatorial addresses are broadcast online. (AP Photo/Cedar Attanasio)

SANTA FE, N.M. (AP) — Political party delegates from New Mexico who traveled to the Republican National Convention or President Donald Trump's speech at the White House this week should self-quarantine for 14 days as they return home, a spokeswoman for Democratic Gov. Michelle Lujan Grisham said Friday.

The delegates are subject to the state's current self-quarantine provision that applies to most travelers as they enter or return to New Mexico, Lujan Grisham spokeswoman Nora Sackett said. The 14-day precaution against possible infection is based on the incubation period of the coronavirus.

The mandate did not apply to Democrats, including the governor, because they attended their party's national convention remotely by video conference without leaving the state.

State GOP Chairman Steve Pearce said through a spokesman that he will follow the quarantine provision and is respectful of the law. He attended a scaled-down convention in Charlotte, North Carolina, on Tuesday with five other delegates, including National Republican Committee members Harvey Yates and Rosie Tripp.

Tina Dziuk, a newly elected member of the GOP national committee, also said she plans to self-quarantine after attending the convention and Trump's speech at the White House, where federal guidelines were ignored about keeping distance, avoiding crowds and wearing masks to fight the spread of the coronavirus.

Dziuk said she was tested for the coronavirus before and during the convention, where face masks were worn amid regulator temperature checks and delegates wore contact- tracing devices attached to their convention credentials. Dziuk, who also serves as the Roosevelt County GOP chairwoman in southeastern New Mexico, says she wore a face mask to the White House event, removing it occasionally for photos and to eat or drink.

“I do feel like it was important to be there,” she said. “Just speaking for myself, I think there's a difference between trying to eliminate exposure versus managing your exposure. ... And I think we did a really good job of that."

Dziuk said she was pleasantly surprised by the variety of people who spoke in support of Trump and expects the president to perform well in New Mexico, based in part on frustration at what she called the governor's overreach with pandemic-based restrictions on indoor dining and religious services.

State health officials are allowing restaurants to reopen indoor dining service and relaxing other provision of the health order as the average rate of positive tests and COVID-19 infections relents.

At the same time, officials are flagging a surge of infections in the southeast of the state that could delay a partial return to classrooms there. The state is giving most school districts the option of returning elementary school students to classrooms on a revolving, part-time basis.

New Mexico’s seven-day rolling average of the positivity rate for COVID-19 has decreased over the past two weeks, going from 2.6% on Aug. 13 to 2.2% on Thursday, according to an analysis by The Associated Press of data collected by Johns Hopkins University Center for Systems Science and Engineering.

Comparing seven-day averages of new cases smooths out anomalies in the data, including delays in daily test results.

On Friday, the state Health Department published a new public guidance document on preventing the spread of COVID-19 that is based on scientific evidence and the experience of federal and state infectious disease experts. Health Secretary Kathy Kunkel said the guidance is aimed at increasing public understanding of the disease while people await development and deployment of an effective vaccine.

The number of infections is thought to be far higher because many people have not been tested. Studies suggest people can be infected with the virus without feeling sick.