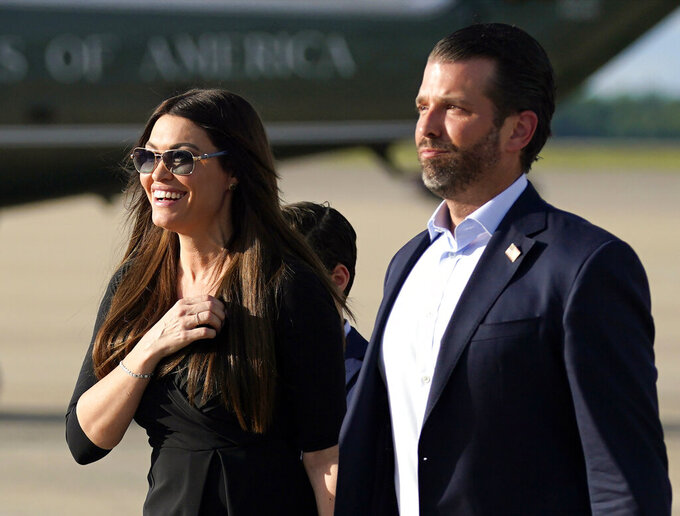 FILE - In this May 27, 2020, file photo, Donald Trump Jr., right, walks with his girlfriend, Kimberly Guilfoyle, after arriving at Andrews Air Force Base, Md., after traveling to Florida with President Donald Trump. The wife and running mate of Republican governor candidate Greg Gianforte, as well as several other top GOP officials, were exposed to the coronavirus after attending an event with Guilfoyle, the Bozeman Daily Chronicle reported. Guilfoyle was diagnosed with the coronavirus on July 3, the New York Times reported. (AP Photo/Evan Vucci, File)

BOZEMAN,Mont. (AP) — The wife and the running mate of Republican gubernatorial candidate Greg Gianforte, as well as several other top GOP officials, were possibly exposed to the coronavirus after attending an event with the girlfriend of President Donald Trump's oldest son, the Bozeman Daily Chronicle reported.

Guilfoyle was diagnosed with the coronavirus on July 3.

Greg Gianforte, Montana's representative in the U.S. House, did not attend the event because Congress was in session, the Daily Chronicle reported.

On July 1, Juras posted a photo on her campaign Facebook page posing less than 6 feet away and without masks with Susan Gianforte, Donald Trump Jr. and Guilfoyle. In the photo’s caption, Juras wrote that the photo was taken the night before, on June 30, the newspaper reported.

“Since learning of their potential exposure, Greg, Susan, and Kristen have adhered to recommended guidelines. Out of an abundance of caution and for the health and safety of others, they will self-quarantine, be tested for COVID-19, and suspend in-person campaign events pending test results,” a Gianforte campaign spokesperson said.

Downing’s campaign manager Sam Loveridge confirmed Downing attended the event. Loveridge said in an email that neither Downing nor his staff were ever in “close proximity” with Guilfoyle.

“Out of an abundance of caution, Troy Downing will be tested as soon as possible and will avoid personal contact and all public functions until a negative test result can be confirmed,” Loveridge told the newspaper in an email.