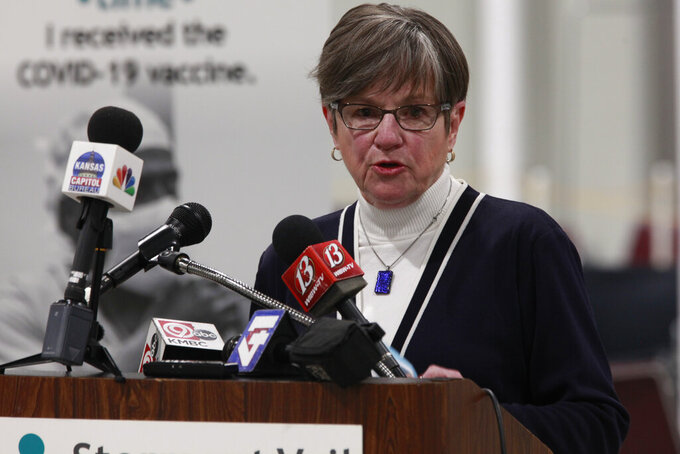 Kansas Gov. Laura Kelly answers questions about the state's plans to accelerate its distribution of COVID-19 vaccines during a news conference following a tour of a mass inoculation clinic, Monday, March 15, 2021, at the Stormont Vail Events Center in Topeka, Kan. The state is trying to meet President Joe Biden's goal of having all adult residents eligible for inoculations by May 1, 2021. (AP Photo/John Hanna)

The House voted 84-39 along party lines for a resolution telling legislative leaders to revoke any order from Kelly for a statewide mask policy. Kelly issued such an order in November that is due to expire Wednesday, and she has said she will issue a new order Thursday.

A law that took effect last week extends a state of emergency for the coronavirus pandemic from March 31 until May 28, but it also allows eight top legislative leaders, including Ryckman, Finch and Hawkins, to revoke orders the governor issues during a state of emergency.

The state has seen a sharp decline in new COVID-19 cases in recent months, and they're now at levels seen last summer. Finch said during a brief House debate on the resolution that no circumstances justify an “overreaching” order on masks from Kelly.

“What we do not need are more statewide mandates,” Finch said.

The new law also leaves the final decision about mask mandates and restrictions on businesses and public gatherings to counties. But Kelly's planned order would require their elected county commissions to take a specific public vote to opt out of a statewide policy requiring people to wear masks in indoor businesses and public spaces.

Kelly said in a statement that the resolution is “unnecessary” because counties can opt out her planned order and said Republicans are engaged in “political games.”

Fellow Democrats noted concerns about coronavirus variants. One potentially more infectious variant first identified in the United Kingdom is responsible for 64 cases in 11 of the state's 105 counties so far, the state health department said.

“We're not at the end of the pandemic yet,” said Rep. Kathy Wolfe Moore, a Kansas City, Kansas, Democrat. “I do absolutely agree that things are getting better, but let's not put all the sacrifices that we've all made at risk.”