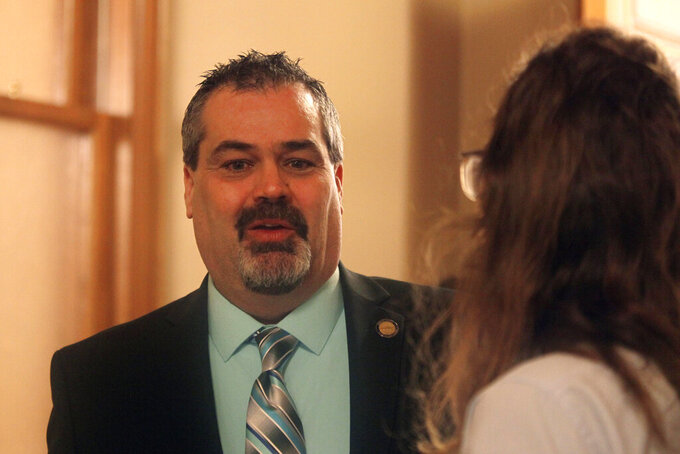 TOPEKA, Kan. (AP) — A Republican lawmaker in Kansas outlined a measure Wednesday that would overturn Democratic Gov. Laura Kelly's policy of withholding doses of COVID-19 vaccines from counties wanting to move to a new phase of inoculations before the rest of the state.

Senate health committee Chair Richard Hilderbrand, of Galena, called the policy “blackmail or extortion.” The state Department of Health and Environment calls withholding vaccine doses an “enforcement mechanism” and Kelly says the goal is to “keep the train running as smoothly as we possibly can.”

Hilderbrand's bill would allow counties to set their own vaccination schedules. It follows several months of widespread criticism of Kelly from the GOP-controlled Legislature over what they view as a slow administration of shots.

“Counties that are doing it right and doing it the right way should be able to have some leeway,” Hilderbrand told The Associated Press.

“We will have Guard staff on hand along with public health department staff as long as is needed," he said.

Some counties were upset last week when the state wouldn’t let them start vaccinating people under 65 with chronic or serious medical conditions that would put them at risk of serious complications or death if they are infected with COVID-19. Those people are covered in the third phase of the vaccine distribution, and the state is still in the second phase.

As of Wednesday, about 491,431 Kansas residents or 16.9% of the state’s 2.9 million residents had received at least one vaccine shot, and 740,850 doses had been administered, the state health department reported. That's 67% of the 1.1 million doses the state has received.

Kelly and state health officials say the state's inoculation numbers have been underreported and are almost certainly higher.

She said the state was holding back doses to make sure healthcare systems in smaller counties are not overwhelmed by residents from larger counties that have yet to complete phase two. But House health committee Chair Brenda Landwehr, a Wichita Republican, said counties could limit shots to their own residents.

The governor said during a news conference Wednesday that Hilderbrand's bill is unnecessary because the state should enter phase three within four weeks.

As for the policy of withholding vaccines she said, she would hope counties see it as “part of the greater good.”

“It's not extortion. It's not blackmail," she said. "It's just being good neighbors.”

Meanwhile, the state's two Republican U.S. senators have taken different positions on how best to distribute the vaccines, The Kansas City Star reports.

U.S. Sen. Roger Marshall argued in a Wall Street Journal op-ed Monday that health officials should deliver a single dose of vaccines made by Moderna and Pfizer as widely as possible rather than ensuring that their required second doses are administered on the established timetable.

Marshall’s recommendation runs contrary to the protocol established by the federal government. Asked about the editorial, Tuesday, U.S. Sen. Jerry Moran said: “I would defer to science and medicine.”

Republicans have signaled that they'll make Kelly's handling of the coronavirus pandemic an issue when she runs for reelection in 2022. They've criticized the stay-at-home order she imposed for five weeks last spring, her closing of all K-12 school buildings from mid-March 2020 to the end of that spring semester, and her unsuccessful attempt to limit indoor religious worship services.

But Kelly defended her actions Wednesday, saying officials didn't know enough about the virus at the time and that it was safest to do what she did.

“It's really easy to be a backseat driver,” she said.

Another 778 COVID-19 cases were recorded between Monday and Wednesday, raising the state’s total since the pandemic began to 297,229. Thirty-five new deaths were reported, raising the total death toll to 4,851.

The governor's actions and local COVID-19 rules have prompted a push to set up a $100 million state fund with future federal COVID-19 relief dollars to pay claims from businesses claiming to be hurt by the restrictions, The Wichita Eagle reports. The attorney general would administer the fund and the governor and legislative leaders would review claims.

A Senate committee plans to have a hearing on the proposal Thursday.