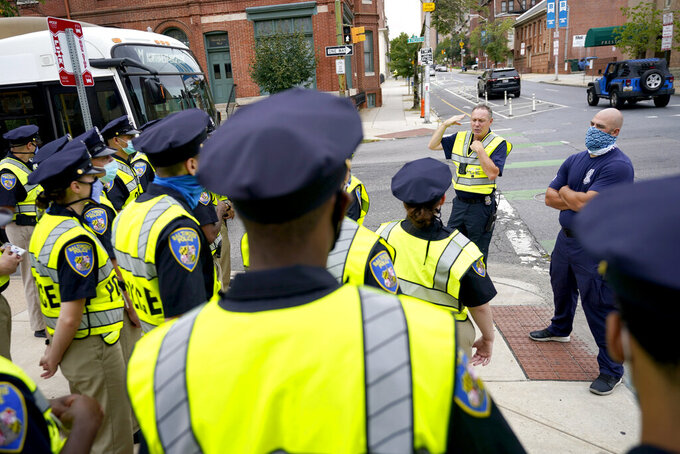 FILE - In this Sept. 9, 2020 photo, Baltimore Police Academy cadets listen to an instructor during an on the field class session learning to direct traffic, Wednesday, Sept. 9, 2020, in Baltimore. As rising murder rates gain attention in U.S. cities, Republicans have ramped up misleading attacks by casting Democrats as anti-police. It's a message they believe helped them stave off greater Democratic gains and one with renewed potency particularly in cities that cut police department budgets amid calls to overhaul policing last year. It's not clear whether the GOP strategy, with roots back to President Nixon's law-and-order message, will be a success for a party that has little support in American cities. But Republicans hope to stem their decline in suburbs with by attacking Democrats' on domestic safety. (AP Photo/Julio Cortez)

DES MOINES, Iowa (AP) — When Minnesota Republican Tyler Kistner announced his candidacy for the U.S. House in April, he asked voters to ponder two questions: “What America will we leave for our children?" and "Will they be taught to hate their police?”

Across the Mississippi River in Wisconsin, Republicans in the 3rd Congressional District aired a digital ad this spring to demand that their Democratic congressman “stand up to attacks on law enforcement.”

And in Iowa, a Republican governor who had promised additional checks on police conduct after George Floyd was killed by a Minneapolis police officer plans to sign a law making it harder for police to be sued on the job.

As rising murder rates gain attention in American cities, Republicans have ramped up a misleading campaign to cast Democrats as anti-police and lax on public safety. It's a message they believe helped them stave off greater Democratic gains in last year's elections and one with renewed potency as cities consider cuts to department budgets as part of an effort to revamp policing.

It's not at all clear that the GOP strategy, which stretches back to President Richard Nixon and was used by President Donald Trump, is a winning one. But it may be prominent as Republicans search for ways to gain ground in suburban areas critical to winning control of the U.S. House next year.

Stansbury's district is overwhelmingly Democratic, making it an imperfect test case. The National Republican Congressional Committee, the party's House campaign arm, believes the issue will have a larger impact in swing districts, where the party plans to tie moderate Democratic incumbents to their more liberal colleagues who have supported the “defund the police” movement. That term is used to describe diverting money from police budgets to other social services, such as mental health support and drug addiction mitigation.

The GOP focus is on places such as Wisconsin's 3rd Congressional District, where 13-term Democratic incumbent Ron Kind is being cast as insufficiently supportive of law enforcement, though he does not support defunding police departments.

It also includes Democratic Rep. Angie Craig of Minnesota, who beat Kistner in 2020 and represents the Minneapolis and St. Paul suburbs where rioting broke out last year after Floyd's death.

Since then, several cities have struggled with the police funding debate, while experiencing rising gun violence.

The NRCC chair, U.S. Rep. Tom Emmer of Minnesota, said he believes the message will resonate with voters because “crime is rising in America, yet Democrats still support the dangerous idea of defunding the police.”

Neither statement is fully accurate.

It's true that violent crime has risen. The FBI's National Incident-Based Reporting System recorded 25% more homicides in 2020 than in 2019, and 12% more violent assaults. But the increase in homicides is nationwide, including in some cities that increased police spending and in some cities led by Republicans.

Other crimes such as burglaries, drug offenses and other categories, however, have decreased.

It also is not accurate to describe Democrats as uniformly supportive of “defund the police” efforts.

The Democratic-controlled House passed a sweeping police overhaul bill in March that did not include a provision to allow diverting money away from police departments. Kind was one of only two Democrats to oppose the bill. He said it did not include sufficient protections for police. Craig voted for the measure.

The bill has stalled in the evenly divided Senate, where Republicans oppose it.

“We are concerned about whether the Biden Administration is prepared to address the surge of violent crime in American cities,” McCarthy wrote in a letter Friday to U.S. Attorney General Merrick Garland.

It's a noticeable shift in tone from a year ago, when many Republicans across GOP-led states briefly joined with Democrats to ban specific physical restraints and require tighter scrutiny on police in the tumultuous aftermath of Floyd's death.

In Iowa, Republican Gov. Kim Reynolds said last June while signing a bill banning chokeholds: “This is not the end of our work. It is just a beginning.”

Though most racial justice demonstrations were peaceful, some scenes of violence and property damage left a lasting image and were highlighted in Republican campaign ads.

A majority of Americans support progressive criminal justice proposals such as programs to help people released from prison transition into society and changes in sentencing laws to allow probation or shorter prison sentences for some first-time convictions, according to a May poll from The Associated Press-NORC Center for Public Affairs Research.

The poll also found that about 6 in 10 Americans oppose reducing funding for law enforcement agencies.

The Democrats' policing bill passed the U.S. House without a single GOP vote. It would ban chokeholds and end qualified immunity from lawsuits against police officers, while creating national policing standards in an effort to bolster accountability.

The bill does not back defunding police departments, and Democrats didn't even debate the idea, in part because swing-district representatives such as U.S. Rep. Abigail Spanberger, D-Va., who opposes defunding police, raised concerns about the political backlash.

Shumaker found the issue brought some independents who were unhappy with Trump's pandemic response and had fallen away from supporting Republicans back into the GOP's ranks last fall in parts of suburban North Carolina, including outside Charlotte and Raleigh.

“The defund the police movement gave Republicans a foundation to go back and repair some of the erosion with those suburban voters that was created by the coronavirus,” Shumaker said.

It's not clear how crime will figure in the mix of issues in next fall's elections. The nation is now just emerging from a year of political battles over COVID-19, recovering from the economic fallout and getting a handle on Biden's agenda to rebuild the economy.

In an interview outside Richmond, Virginia, this past week, Spanberger said the message on crime can help Republicans unless Democrats speak up.

“It’s always going to be difficult when a simple message is easy to gin up anxiety," Spanberger said. "It becomes difficult to counter that. But it takes a lot of effort."