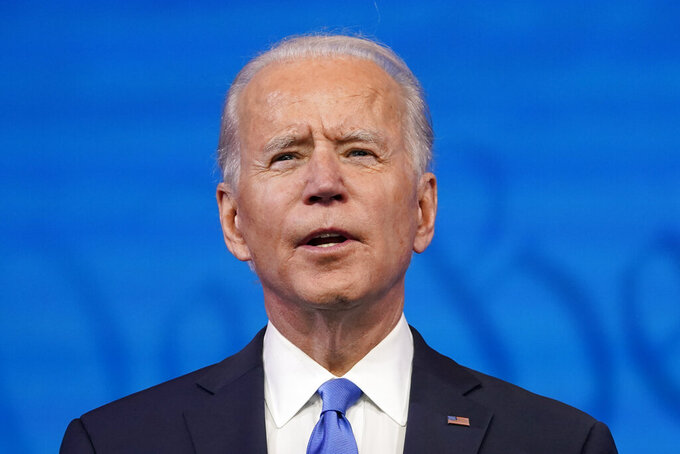 WASHINGTON (AP) — Republican Sen. Ben Sasse of Nebraska issued a pointed rebuke Thursday of GOP attempts to object Jan. 6 to the Electoral College tally of the presidential election, warning colleagues against a “dangerous ploy” that could damage the nation's civic traditions.

Sasse, a potential 2024 presidential contender, posted a lengthy explanation of his views on social media, including a paragraph by paragraph dismantling of allegations of voter fraud in key states won by President-elect Joe Biden. Sasse said he felt compelled to speak “truth” as constituents and those supporting President Donald Trump wanted to know where he stands on the issue.

“I will not be participating in a project to overturn the election,” Sasse wrote. He said he wanted to explain “why I have been urging my colleagues also to reject this dangerous ploy.”

Trump, the first president to lose a reelection bid in almost 30 years, has attributed his defeat to widespread voter fraud, despite nonpartisan election officials saying there wasn't any. He has pushed Republican senators to pursue his unfounded charges even though the Electoral College this month cemented Biden’s 306-232 victory and multiple legal efforts to challenge the results have failed.

The missive from Sasse offers the Republican Party a different path for the post-Trump era, in stark contrast to other potential 2024 contenders — most notably, Sen. Josh Hawley, R-Mo. — who are leading the challenge during next week's joint session of Congress.

Hawley became the first GOP senator this week to announce he will raise objections when Congress meets to affirm Biden’s victory in the election, forcing House and Senate votes that are likely to delay — but in no way alter — the final certification of Biden's win.

Other Republican senators are expected to join Hawley, wary of ceding the spotlight to him as they, too, try to emerge as leaders in a post-Trump era.

Some Republicans in the Democratic-majority House have already said they will object on Trump’s behalf during the Jan. 6 count of electoral votes, and they had needed just a single senator to go along with them to force votes in both chambers.

Sasse took aim at the “swampy” nature of Trump's fundraising off the election challenge as he outlined his reasons for believing Biden's electoral win is valid.

“Since Election Day, the president and his allied organizations have raised well over half a billion (billion!) dollars from supporters who have been led to believe that they’re contributing to a ferocious legal defense,” Sasse wrote. “But in reality, they’re mostly just giving the president and his allies a blank check that can go to their super-PACs, their next plane trip, their next campaign or project. That’s not serious governing. It’s swampy politics.”

He put the election challenges being waged by Trump's legal team in Nebraska terms.

Sasse wrote that he couldn't "simply allege that the College Football Playoff Selection Committee is ‘on the take’ because they didn’t send the Cornhuskers to the Rose Bowl, and then – after I fail to show evidence that anyone on the Selection Committee is corrupt – argue that we need to investigate because of these pervasive ‘allegations’ of corruption.”

With 160 million votes nationwide, there will be some instances of fraud, he said, but nothing of the magnitude to overturn the election.

“We have good reason to think this year’s election was fair, secure, and law-abiding,” Sasse wrote. “That’s not to say it was flawless. But there is no evidentiary basis for distrusting our elections altogether, or for concluding that the results do not reflect the ballots that our fellow citizens actually cast.”

Without giving specifics or evidence, Hawley said Wednesday that he would object because “some states, including notably Pennsylvania,” did not follow their own election laws. Some states made changes to their election procedures, such as expanding absentee voting, to accommodate voters during the coronavirus pandemic, the worst U.S. public health emergency in a century. Lawsuits challenging Biden's victory in Pennsylvania have been unsuccessful.

“At the very least, Congress should investigate allegations of voter fraud and adopt measures to secure the integrity of our elections,” Hawley said in a statement. He also criticized the way Facebook and Twitter handled content related to the election, characterizing it as an effort to help Biden.

Jen Psaki, a spokesperson for the Biden transition team, dismissed Hawley’s move as “antics” that will have no bearing on Biden being sworn in on Jan. 20.

“The American people spoke resoundingly in this election and 81 million people have voted for Joe Biden and Kamala Harris,” Psaki said in a call with reporters.

Trump cut short his Florida holiday vacation to return to Washington on Thursday, one day earlier than expected, for reasons the White House didn’t explain.

When Congress convenes to certify the Electoral College results, any lawmaker can object to a state’s votes on any grounds. But the objection is not taken up unless it is in writing and signed by both a member of the House and a member of the Senate.

When there is such a request, then the joint session suspends and the House and Senate go into separate sessions to consider it. For the objection to be sustained, both chambers must agree to it by a simple majority vote. If they disagree, the original electoral votes are counted.

As president of the Senate, Vice President Mike Pence will preside over the Jan. 6 session and declare the winner.

Senate Majority Leader Mitch McConnell, R-Ky., had asked his caucus not to participate in a futile quest to overturn the results.

A range of nonpartisan election officials and Republicans has confirmed there was no fraud in the November contest that would change the results of the election. That includes former Attorney General William Barr, who said he saw no reason to appoint a special counsel to look into the president’s claims about the 2020 election. He resigned from his post last week.

Trump and his allies have filed roughly 50 lawsuits challenging election results, and nearly all has been dismissed or dropped. He’s also lost twice at the U.S. Supreme Court.

The group of House Republicans has said it plans to challenge the election results from Michigan, Wisconsin, Pennsylvania, Georgia and Nevada. All are states that Biden carried.