GOP tries to save its Senate majority, with or without Trump 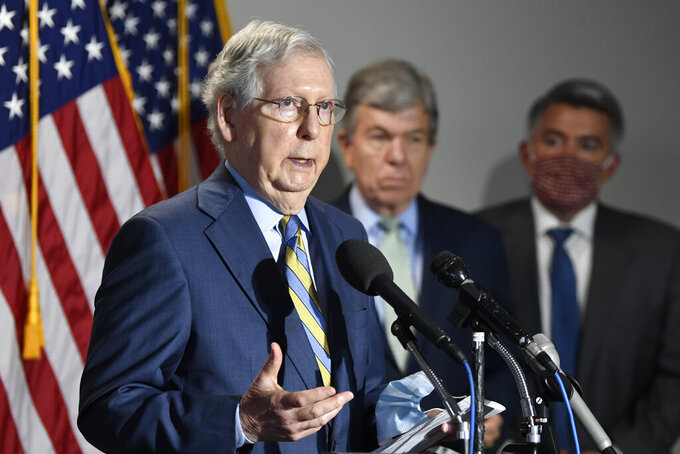 FILE - In this June 9, 2020, file photo Senate Majority Leader Mitch McConnell of Ky., left, speaks to reporters following the weekly Republican policy luncheon on Capitol Hill in Washington. Sen. Roy Blunt, R-Mo., center, and Sen. Cory Gardner, R-Colo., right, listen. Republican senators are fighting to save their majority against an onslaught of challengers in states once off limits to Democrats that are now hotbeds of the backlash to President Donald Trump and his allies on Capitol Hill. (AP Photo/Susan Walsh, File)

WASHINGTON (AP) — Senate Republicans are fighting to save their majority, a final election push against the onslaught of challengers in states once off limits to Democrats but now hotbeds of a potential backlash to President Donald Trump and his allies on Capitol Hill.

Fueling the campaigns are the Trump administration’s handling of the COVID-19 crisis, shifting regional demographics and, in some areas, simply the chance to turn the page on the divisive political climate.

Control of the Senate can make or break a presidency. With it, a reelected Trump could confirm his nominees and ensure a backstop against legislation from House Speaker Nancy Pelosi, D-Calif. Without it, Joe Biden would face a potential wall of opposition to his agenda if the Democratic nominee won the White House.

In North Carolina, for example, the match-up between GOP Sen. Thom Tillis and Democratic challenger Cal Cunningham, among the most expensive in the nation, is close.

“At some point, you put it in the hands of voters,” said Dallas Woodhouse, a former executive director of the state's Republican Party.

Republican incumbents are straining for survival from New England to the Deep South, in the heartland and the West and even Alaska. Overpowered in fundraising and stuck in Washington until just last week to confirm Trump's Supreme Court nominee, they are fanning out some alongside Trump for last-ditch, home-state tours to shore up votes.

With the chamber now split, 53-47, three or four seats will determine Senate control, depending on which party wins the White House. The vice president breaks a tie in Senate votes.

What started as a lopsided election cycle with Republicans defending 23 seats, compared with 12 for Democrats, quickly became a more stark referendum on the president as Democrats reached deeper into Trump country and put the GOP on defense.

Suddenly some of the nation’s better-known senators — Lindsey Graham in South Carolina, Susan Collins in Maine — faced strong reelection threats. Only two Democratic seats are being seriously contested, while at least 10 GOP-held seats are at risk.

“I don’t see how we hold it,” said Chip Felkel, a Republican strategist in South Carolina who opposes the president.

Felkel added: “You’d be hard pressed to admit we don’t have a Trump problem.”

The political landscape is quickly changing from six years ago when most of these senators last faced voters. It's a reminder of how sharp the national mood has shifted in the Trump era.

Younger voters and more minorities are pushing some states toward Democrats, including in Colorado, where the parties have essentially stopped spending money for or against GOP Sen. Cory Gardner because it seems he is heading toward defeat by Democrat John Hickenlooper, a former governor.

In more Republican-friendly terrain, the GOP senators must balance an appeal to Trump's most ardent supporters with outreach to voters largely in suburbs who are drifting away from the president and his tone .

Tillis is struggling to gain ground in North Carolina, a presidential battleground, even after Cunningham's sex-texting scandal with a public relations strategist.

Arizona could see two Democratic senators for the first time since last century if former astronaut Mark Kelly maintains his advantage over GOP Sen. Martha McSally for the seat held by the late Republican John McCain.

A vivid dynamic is in Iowa, a state Trump won in 2016 but is now a toss-up as Sen. Joni Ernst struggles to fend off Democrat newcomer Theresa Greenfield. Ernst wowed Republicans with a 2014 debut ad about castrating hogs but she faced criticism after last month's debate when she stumbled over the break-even price for soybeans.

In Georgia, Trump calls David Perdue his favorite senator among the many who have jockeyed to join his golf outings and receive his private phone calls. But the first-term senator faces a surge of new voters in the state and Democrat Jon Ossoff is playing hardball.

Ossoff called Pedue a “crook” over the senator's stock trades during the pandemic. Perdue shot back that the Ossoff would do anything to mislead Georgians about Democrats' “radical and socialist” agenda.

Democrats have tapped into what some are calling a “green wave” — a new era of fundraising — as small-dollar donations pour in from across the country from Americans expressing their political activism with their pocketbooks.

Graham’s challenger in South Carolina, Jamie Harrison, has raised so much money — some $100 million — that it sent the top Trump ally scrambling to take the race seriously. Graham swiftly raked in his own record haul as he led the Senate confirmation of Amy Coney Barrett to the Supreme Court.

Competitive races are underway in Republican strongholds of Texas, Kansas and Alaska where little known Al Gross broke state records, Democrats said, in part with viral ads introducing voters to the military-veteran-turned-doctor who once fought off a grizzly bear.

Swooping in to fill the gap for Republicans is the Senate Leadership Fund, tapping deep-pocketed donors. Casino magnate Sheldon Adelson has funneled more than $60 million to help Republicans hold the Senate.

Over the weekend, the fund was pouring $4.6 million to one of the rare Republican bright spots — in Michigan, where John James, a Black Republican businessman is gaining on Democratic Sen. Gary Peters.

The only other state where Republicans are playing offense is Alabama, where Democratic Sen. Doug Jones pulled off a rare special election win the Trump stronghold but now wages a longshot campaign against Republican Tommy Tuberville, a former Auburn football coach.

“We are confident heading into the home stretch because we remain on offense is so many seats across the country,” said Stewart Boss, a spokesman for the Democratic Senatorial Campaign Committee.

The COVID crisis has shadowed the Senate races as Democrats linked Trump's handling of the pandemic to the GOP's repeated attempts to undo the Obama-era Affordable Care Act, particularly its insurance protections for those with preexisting medical conditions. Republicans fired back that Democrats want to keep the economy closed, hurting jobs.

David Flaherty, a Colorado-based Republican pollster, said his surveys are showing that COVID will be “the most likely issue many voters will make their decisions on.”

“In more places in the country than not, the president is not getting good marks” on that, Flaherty said, and it’s damaging Senate GOP candidates, “especially those in lockstep with the president.”

Several races may drag well past election night including if no candidate secures a majority, including in Georgia or Maine, where Collins was once considered among the most independent senators, is now confronting critics from the right and left.

Jesse Hunt, spokesman for the National Republican Senatorial Committee said the races are tightening in the final days.

“We always knew this was going to be a competitive election cycle,” he said.

This story has been corrected to show that the woman Cunningham texted with was a public relations strategist, not an aide.