GOP wants mail-in ballots by request only in New Mexico 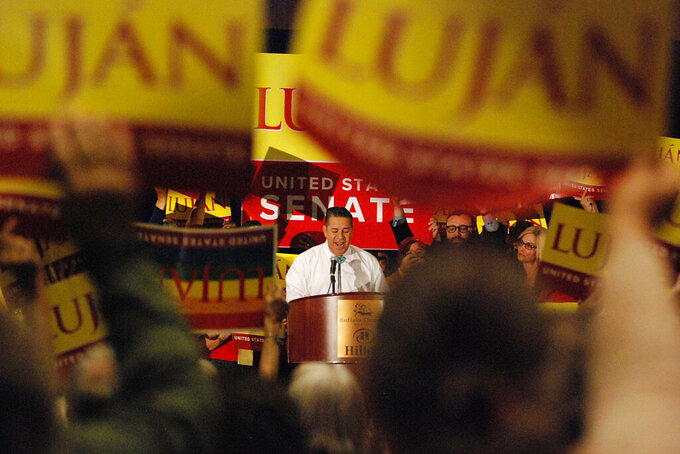 SANTA FE, N.M. (AP) — Legal battle lines were drawn Wednesday in a standoff over alternatives to in-person voting amid a coronavirus stay-at-home order and targeted curfew in New Mexico, where Democrats dominate all three branches of government and the Republican Party says mail-in ballots should be distributed by request only.

The increasingly blue state provides a counterpoint to a decision in Wisconsin to forge ahead with in-person voting Tuesday at the insistence of its conservative-majority state Supreme Court and Republicans. Across the country, major parties are preparing for a monthslong, state-by-state legal fight over how citizens can safely cast their ballots should the coronavirus outbreak persist through November’s election.

New Mexico's Democrat-dominated state Supreme Court was collecting written briefings Wednesday as it weighed a request from a majority of local election regulators to suspend standard in-person voting at local precincts in the June 2 primary and instead distribute mail-in ballots broadly to active-voter addresses where election-related mail has not bounced back.

The proposal from about two dozen county clerks also would provide “service centers” for people who still want to fill out a provisional ballot on election day or deliver an absentee ballot by hand.

The idea is to safeguard voters and elderly poll workers from the risk of infection at polling and early voting sites. But advocates for voting access said in court filings that any election limited to mail-in ballots alone runs the risk of disenfranchising residents of extremely remote rural areas without internet access or traditional street addresses.

The Legislature appeared unlikely to take up the matter on its own because of potential health risks of meeting in person and legal obstacles associated with remote conferencing technologies.

New Mexico Gov. Michelle Lujan Grisham has closed schools, nonessential business and issued a stay-at-home order, as the Navajo Nation enforces an evening and weekend curfew across the northwest portion of the state in response to a major coronavirus outbreak there.

Republicans legislators and party officials contend that election regulators are not equipped to match and verify mass-mailed ballots with voter registration information on a large scale.

But the secretary of state's office overseen by Democrat Maggie Toulouse Oliver said it is well positioned to track and receive mail-in ballots for all eligible major party voters, citing the recent modernization of the voter registration system.

“The absentee process is well known, it's legal, it's part of what we do,” he said. “It would be fairly simple for the secretary of state to send a letter out and have a post card in it saying, hey, we're requiring everybody to vote by mail, here's your absentee request, just fill it out and send it in. But if somebody other than the voter sends that in, it's a violation of the law and there are legal consequences."

Groups including the state League of Woman Voters warned that limiting voting options could disenfranchise residents including members of the Navajo Nation, where many people live without reliable mail service, access to the internet or even electricity in some instances.

League President Hannah Burling noted that mail-in balloting by request sets off an unreliable mail chain to request, receive and return the ballot.

“That is three mailings for most rural New Mexicans,” she said. "There's really not that much time. And how to get that word to them, to let them know what they need to do this?”

The 2020 Democratic primary is likely to be decisive in an open race to succeed U.S. Rep. Ben Ray Luján as he runs for Senate. In November, the entire Legislature is up for election as the state fills a U.S. Senate seat held by retiring Democratic Sen. Tom Udall.

New Mexico Democrats in 2018 flipped the governor’s office and a swing district in Congress to consolidate control over the state’s Washington delegation, all statewide elected offices and reinforce majorities at the Statehouse and Supreme Court.