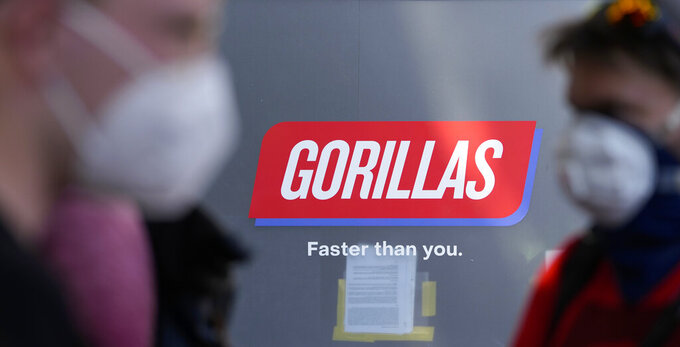 Workers block the entrance of a depot for German startup Gorillas, a grocery delivery company, during a protest against the firing of a colleague in Berlin, Germany, Thursday, June 10, 2021. The delivery service Gorillas now operates in dozens of cities across Germany, France, Italy, the Netherlands and Britain, and has already set its sights on New York. (AP Photo/Markus Schreiber)

BERLIN (AP) — Dozens of workers gathered outside of one of Berlin's most-celebrated startups, the grocery delivery company Gorillas, to protest the firing hours earlier of a colleague.

“We want Santiago back!” the young riders chanted last week, threatening to blockade one of the company's inner-city warehouses with their bikes unless he was reinstated.

The wildcat strike on a balmy June evening was unusual even by Germany's strong tradition of labor rights, highlighting growing tensions in the capital's freewheeling startup scene.

“We came here to show our solidarity, to support our friend,” said Zeynep, a Gorillas rider who declined to give her last name for fear of facing repercussions from the company. "We want this decision to be reversed as soon as possible.”

The riders said their colleague had been fired without warning after turning up late for his shift. In a statement, the company said he his contract was terminated for “serious misconduct” but declined to provide details, citing confidentiality.

Founded just last year, Gorillas has benefited from surging demand for quick grocery deliveries during the pandemic. In March, the company raised about $290 million from investors, becoming Germany’s fastest 'unicorn’ — a startup with a total valuation of $1 billion or more.

Gorillas now operates in dozens of cities across Germany, France, Italy, the Netherlands and Britain, and has already set its sights on New York, where it faces U.S. incumbents such as Gopuff.

But strikes like those in Berlin show trouble is brewing in its home market.

The rowdy but peaceful protest late Wednesday drew support from employees of rival delivery services, some of whom downed their colorful courier bags to join the picket. Eventually Gorillas agreed to close the depot for the night, drawing cheers from the protesters.

The next day, riders blockaded another warehouse, making clear their gripes go beyond the firing of a single colleague.

“In the last six months, that I’ve been here I’ve noticed so many ways that the company is doing things in an unjustified way,” said rider Huseyin Camalan. “We’re here to stand against that. It’s part of a larger thing.”

Camalan said many riders suffer from back pain and other health problems due to the heavy bags they have to carry. Faulty bikes, a limited say in their shifts and lack of administrative support are also a problem, he said.

When riders send emails asking for help, they rarely get a reply, Camalan said, adding "They ignore us.”

Last week four rivals — Delivery Hero, Bolt, Glovo and Wolt — announced a joint effort to develop a code of conduct in what appeared to be an effort to head off a regulatory crackdown by the European Union.

“We want to establish better governance of working conditions, labor practices and social rights for all workers, regardless of their employment status,” Sacha Michaud, co-founder of Spain-based delivery company Glovo said.

According to experts, many delivery firms in Germany operate on the edge of legality in their rush to expand before they run out of cash.

Gorillas says it doesn't consider itself part of the ‘gig economy,’ having chosen to employ its riders and warehouse staff. But hourly wages are low at 11.50 euros (less than $14) after tips and the probationary period is six months — the longest allowed by law.

Riders at the protest complained that the company doesn't issue them with phones they need for work, that salaries are often short and weight limits on bags aren't respected.

“The working conditions are at the minimum end of what’s normal in Germany,” said Sebastian Riesner, who heads the Berlin chapter of the hospitality workers union NGG. “Some of the contracts are pretty outlandish.

"There seems to be a strategy of relying on people who don't know the rules in this country."

Angry Gorillas riders recently banded together and, with the help of NGG, began the process of electing a works council. Under German law, members of the council get a say on working conditions and firings.

Falling in line with Germany's established labor practices could make it harder for businesses like Gorillas to turn a profit.

“I don’t think these companies are earning any money at the moment,” said Werner Reinartz, a retail expert at the University of Cologne. German business monthly Manager Magazin cited internal documents suggesting that Gorillas loses 1.50 euros ($1.82) on every order.

At the same time, foreign rivals such as Getir from Turkey and Britain-based Weezy are eyeing a launch in Europe's biggest economy, where they will compete for the same limited pool of riders — already dwindling as other parts of the economy wake up from the pandemic lockdown.

“The strikes show that the current model is difficult to carry forward,” said Reinartz. “You need people who want to do this job."

The company's chief executive, Kagan Sumer, said in a message to staff that he was “deeply troubled” by the events of the past days, but insisting that the firing of the rider had been a “difficult but necessary decision.”

Sumer didn't address the protesters' broader complaints, but instead announced plans to cycle to every city where the company operates, to meet staff and ride through the cities with them.

“If these companies want to have a future in Berlin, then they need to immediately respect the minimum standards of treating their employees fairly,” he said.

Riders such as Camalan insist they can force a change from below.

“We live in Germany." he said. “We don't live in some random country that doesn't have any labor laws.”