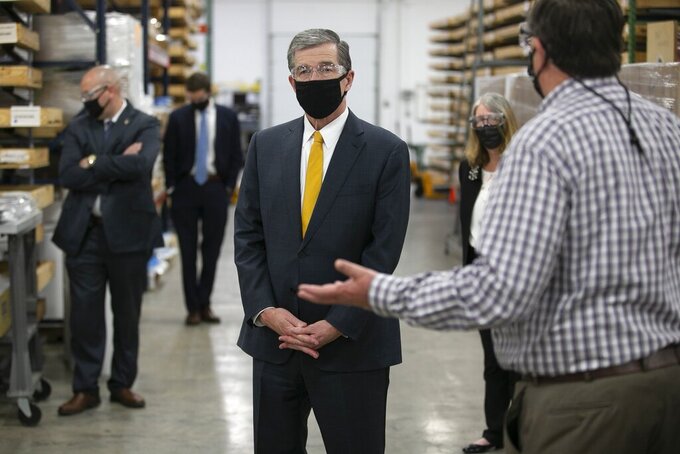 DURHAM, N.C. (AP) — Gov. Roy Cooper said Thursday that North Carolina could stop the spread of the coronavirus if more North Carolinians were following the COVID-19 measures that are now in place.

But he said stricter measures may be required.

“We will do what we need to do in order to protect the health and safety of North Carolinians,” Cooper said, responding to a question about stricter safety measures.

Cooper’s remarks came during a Thursday afternoon visit to Bright View Technologies, a Research Triangle Park company that in late March partially shifted from making plastic light filters to making face shields. Around the time Cooper was arriving at the RTP location, North Carolina was reporting a one-day total of more than 4,000 new COVID-19 cases for the first time during the pandemic.

Cooper said the state could revisit its guidelines before the most recent executive order expires on Dec. 4. That order effectively extends Phase 3 of his plan to reopen the state, but lowered the in-person gathering limit from 25 people to 10.

Cooper, DHHS Secretary Mandy Cohen and local health officials have all urged North Carolinians to reduce the size of their Thanksgiving gatherings this year in order to keep COVID-19 from spreading. Thursday, the Centers for Disease Control and Prevention released guidance that said staying home is the best option this year.

“We all want to see each other during the holiday, but we really are in a position where we can turn the corner of this pandemic as soon as these vaccines begin to be distributed,” Cooper said.

During his visit, Cooper met with company officials and toured the plant where the face shields are being made. Everyone wore masks throughout.

Jennifer Aspell, Bright View’s president, told Cooper the company realized it had the materials to make face shields on a Sunday in late March, had the prototype by Monday and had a contract with N.C. Emergency Management by Thursday afternoon. Since then, the company has manufactured more than 750,000 plastic shields. More than half, Aspell said, have gone to North Carolina state and local governments.

At the peak of demand, Aspell said, the company was able to expand beyond its 37 employees, adding as many as 36 part-time independent contractors to assemble the face shields.

“In my 25-plus year career, this is the most rewarding experience we’ve ever had,” Aspell said, “and that’s because we are able to keep people working and we were actually able to hire more people.”

As Cooper turned one of the shields in his hands, Aspell told him that Bright View had sourced all of the components it didn’t have from other North Carolina companies because of the need to move quickly in the pandemic’s early days. For instance, Aspell said, the foam cushioning for the wearer’s forehead came from REMPAC, a company in Lumberton.

North Carolina, Cooper noted, had awarded REMPAC a $1.1 million grant to build a berm after flooding during Hurricanes Matthew and Florence.

Cooper also toured the manufacturing plant, watching employees cut plastic into shield shapes and assemble the final products. Several employees wore bright red shirts that had the words “Bright Shield Team 2020” printed on the back, surrounded by a shield shape with the words “safety, continuity and responsibility.”

Cooper lauded Aspell and her team for their quickness in switching over to the shield, a product that now makes up about 20% of their total sales.

“Finding opportunity in crisis, you helped create jobs for people who had lost jobs and not only kept your own people employed, but added to the woodpile for jobs, so to speak. So that’s the thing that we want to see in North Carolina with our entrepreneurial, innovative spirit,” Cooper said.

Another announcement made just before Cooper arrived in RTP concerned ApiJect, a Connecticut-based company that announced plans to build a 1-million square-foot facility that could employ about 650 people in Durham. ApiJect received a $590 million loan from the federal government to build the facility, where it plans to produce single-dose, pre-filled injectors that could be used to deliver a COVID-19 vaccine.

North Carolina is excited about ApiJect’s potential, Cooper said. He pointed to the area’s colleges, existing biotechnology companies and work force as potential reasons for the company choosing the Triangle for its expansion.

“We’re continuing to work to get this opportunity in crisis and to create better-paying jobs,” Cooper said. “And we’ve got a long road ahead where we can position ourselves to get people retrained and educated to make sure they get some of these better-paying jobs to tackle our post-pandemic economy and economic recovery.”