Gov. Kemp frustrated by tight supplies of vaccine in Georgia 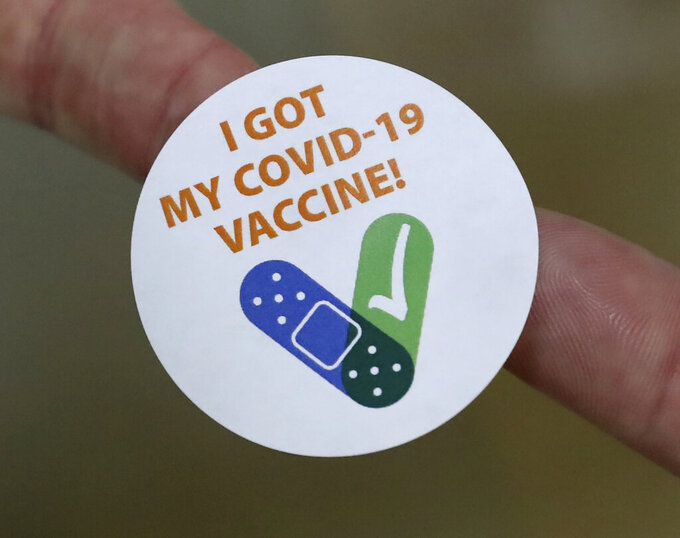 A vaccination sticker is shown at the Paulding County Health Department on Tuesday, Feb. 2, 2021, in Dallas, Ga. (Curtis Compton/Atlanta Journal-Constitution via AP)

Georgia could set up more mass vaccination centers and offer more shots — if it had the supply to do so, he said.

“It’s frustrating for us," he said as he toured the facility at a large park in Marietta where the North Georgia State Fair is held.

“If we had more, we could certainly do it," he said. “We have a plan right now to do sites just like this all over the state. The problem is, we just don’t have the doses to do it, but we’re getting there.”

The Marietta center includes multiple lanes for cars and trucks to drive through, and people can get vaccinated without leaving their vehicles.

At a briefing on the virus after Kemp's tour, he noted one lane behind him that was not being used at the moment.

“If we had more supply right now, that lane that’s empty could be full of cars but it’s not, because we just don’t have the vaccine," he said.

“Georgia’s vaccine supply continues to not meet the demand that we have out in the community," he added. “Our demand is drastically outpacing the supply that we’re seeing in our state.”

President Joe Biden has said the federal government is working to increase vaccine supplies. States will see about a 16% boost in deliveries of vaccines in coming weeks, he said recently.

The White House on Tuesday announced that 1 million doses will be distributed directly to about 6,500 pharmacies across the nation.

In Georgia, health care providers have now administered about one million doses of vaccine statewide, the governor said. About 500,000 older Georgians have now received their first shot, he said.

“These are certainly two big, encouraging milestones against our fight against COVID-19, but we know that we can not rest on our laurels," he said Wednesday.

About 800,000 people in Georgia have received at least one dose of vaccine, according to the latest updates from the federal Centers for Disease Control and Prevention. That’s more than 7% of the population.

Given the vaccine supply shortages, some public health districts have had to “pause" appointments because they don't have enough vaccine, Kemp's office said recently.

However, there are “promising trend lines" in the state's data, Kemp said Wednesday. He said the average number of new cases has declined 46% from its peak on Jan. 11.

Hospitalizations are also down. Statewide, the number of patients hospitalized with COVID-19 is now more than 1,700 patients lower than at its peak on Jan. 12.

“We are also still in a deadly race against a highly contagious virus,” Kemp said.

People gathering to watch the Super Bowl on Sunday should follow guidelines recommended by health officials, which include masks and social distancing, said Dr. Kathleen Toomey, commissioner of the Georgia Department of Public Health.