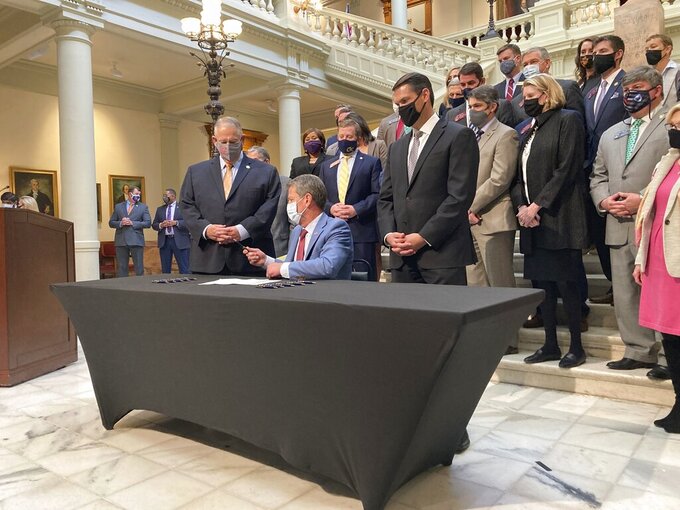 Georgia Gov. Brian Kemp, seated, hands a pen to Georgia House Speaker David Ralston on Monday, March 22, 2021, at the state capitol in Atlanta after signing a tax cut bill. The measure would raise the amount of money someone can earn before paying state income taxes, saving most individual filers up to $43. (AP Photo/Jeff Amy)

ATLANTA (AP) — Gov. Brian Kemp signed a modest state income tax cut into law Monday, saying Georgia's ability to cut taxes was proof that his approach to the coronavirus pandemic had resulted in a strong economy.

“Our fight to protect lives and livelihoods has paid off time and time and time again,” Kemp said. "It has certainly allowed us to be able to stand here today."

The governor was flanked by House Speaker David Ralston and Lt. Gov Geoff Duncan, all three Republicans, as he signed House Bill 593, which will raise the amount of money someone could earn before starting to pay state income taxes.

It will reduce Georgia's overall income taxes by an estimated $140 million. The standard deduction for an individual will rise from $4,600 to $5,400, while the standard deduction for a married couple filing jointly will rise from $6,000 to $7,100. The tax cut will save individual tax filers up to $43 a year, and married couples filing jointly up to $63.

Kemp said the tax cut will provide a boost to people “when they need it and deserve it the most," saying extra income could help boost the recovery of small businesses following the pandemic. However, the tax cut does not take effect until Jan. 1, and most Georgians are unlikely to notice it until 2023, when they file income tax returns for 2022.

The measure passed unanimously in the House, but faced opposition in the state Senate from some Democrats who argued that the state needs money to fulfill unmet service needs, and continuing concerns about forfeiting some of the more than $4.5 billion in federal aid Georgia will get.

That's because the bill had faced questions about whether it would run afoul of part of the recent federal relief bill that barred states from using federal aid to give tax cuts. But the U.S. Treasury Department signaled last week that states can give tax cuts using their own money.

Ralston, a key force behind the tax cuts, thanked other officials for joining him in opposing “such an egregious federal overreach.”

Kemp also signed House Bill 114, which would raise the tax credit for adopting a foster child to $6,000 for the first five years after an adopting a child. The credit would stay at the current $2,000 a year for any remaining years until the child turns 18.

Before the pandemic scrambled state revenues last year, Republicans were eyeing a larger tax cut. Lawmakers cut the state's top income tax rate from 6% to 5.75% in 2019. Republicans envisioned an additional quarter-percentage decrease to 5.5%. Analysts estimated the state would forgo $500 million or more from another cut.