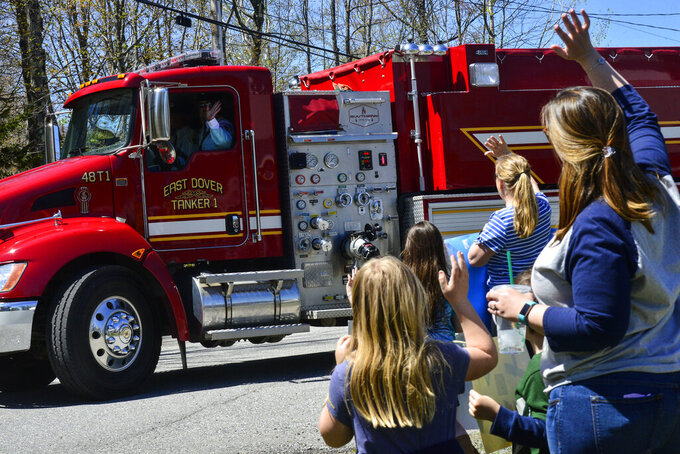 Teachers from the Dover School and first responders tour around the Dover, Vt., area to send a message of missing their students on Wednesday, May 20, 2020. (Kristopher Radder/The Brattleboro Reformer via AP)

“I know this has been a significant sacrifice for far too many, families who struggle with unemployment and businesses and entrepreneurs across the state who've seen their world and dreams evaporate right before their eyes through no fault of their own," he said at a press briefing.

The first phase is $310 million to help businesses survive right now, he said. It includes grants for those most impacted, such as food and acommodation services, retail and agriculture; funding to assist landlords and renters; technical help for business owners; and an in-state marketing campaign to boost local buying, he said.

The second phase will be a $90 million investment to help the economy survive and be better equipped to thrive in the future, he said.

“We believe the economic relief and recovery package we are proposing today is our first punch back at this virus,” said Commerce and Community Development Secretary Lindsay Kurrle.

The Legislature must approve the proposal. House Speaker Mitzi Johnson said she agrees with the governor that Vermonters need immediate investments to restart the economy. She said she wanted to make sure that the one-time funding is invested in getting Vermonters back on their feet “while creating a lasting impact for years to come, such as investments in broadband expansion, housing stock, a safe and healthy food supply chain, and emergency preparedness.”

The biggest part of the governor's package is $250 million in grants and loans to businesses. That includes $150 million to be used for grants to those hardest hit sectors of food and accommodation services, retail and agriculture for expenses like rent, mortgage payments, utilities, inventory or other essential operating expenses, Kurrle said. The grants will be given out by the Vermont Department of Taxes and the Agency of Agriculture, Food and Markets. She said $80 million will be used for grants and low and no-interest loans to other businesses, which the Vermont Economic Development Authority will distribute.

The struggling dairy industry was hit with a sudden collapse in markets when restaurants, stores and schools closed. And the forecast is for milk prices paid to farmers to reach historic lows in the coming months, said Agriculture Secretary Anson Tebbetts. Vermont cheesemakers have reported sales losses ranging from 50% to 95%, he said. Under the governor’s proposal, $40 million would be allocated for payments to dairy farmers and $10 million to processors.

“It’s estimated that many dairy farms will not be able to pay their bills next month and five farmers and farms closed the first weekend in May and many more could be next if we do not act,” he said.

The Vermont Department of Health reported no new cases of the coronavirus on Wednesday, leaving the total number of cases at 944. The total number of deaths remained the same at 54 for the fourth day in a row.