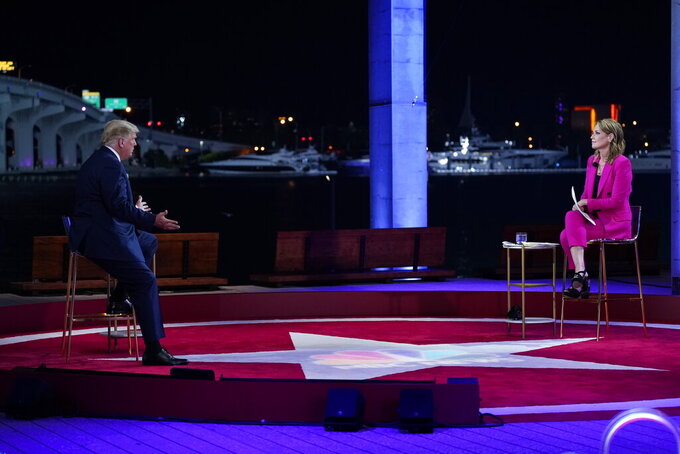 NEW YORK (AP) — Savannah Guthrie did more than just display her journalistic chops at NBC News' town hall with President Donald Trump. She changed the subject for her bosses.

NBC was reeling heading into Thursday's event, under widespread criticism for scheduling it at the same time as ABC's town hall with Democratic opponent Joe Biden. NBC was accused of rewarding Trump for rejecting the debate commission's plan to do the second debate virtually.

That was quickly forgotten when the president sat opposite Guthrie, who questioned him specifically on when he last tested positive for COVID-19 (he said he didn't remember), whether he had pneumonia (didn't say) and his personal finances.

The Georgetown Law School graduate had clearly done her homework, seemingly prepared for each response. When the president recited a statistic from a study on the effectiveness of masks in spreading COVID-19, Guthrie had read it, too, and countered him.

As host of the “Today” show, Guthrie knows the importance of time and how to stop an interview subject from filibustering. That background also teaches how to crystallize what an audience is thinking in a plain-spoken way, as evidenced in her most-quoted moment.

She was incredulous when, after asking why Trump had retweeted a false conspiracy theory that American special forces didn't really kill Osama bin Laden, he said that he “just put it out there” to let people decide for themselves.

“I don't get that,” Guthrie said. “You're the president. You're not like you're somebody's crazy uncle who can just retweet anything.”

Similarly, Guthrie described the theory promoted online by QAnon that Democrats are running a satanic pedophile ring and that Trump was the savior meant to stop them, and asked why he didn't denounce it. Trump said he knew nothing about it.

Just because she says something doesn't mean it's true, the president retorted.

“There's not a satanic pedophile cult," she said. “You don't know that?”

Trump is “hands down” the most difficult public figure to interview, said Axios reporter Jonathan Swan, who with Fox News’ Chris Wallace and now Guthrie have received the most praise of any TV journalists to take him on this election cycle.

“The biggest challenge with President Trump is that it’s never a linear conversation,” Swan said. “It’s like riding a bronco. The crafting of the questions doesn’t really matter because he responds to topics.”

It requires enormous homework, both to know the facts and anticipate how Trump will respond, he said. Even then, it’s possible to become so absorbed in fact-checking that it disrupts the flow of conversation, he said.

When Guthrie asked Trump about his personal finances and taxes, the president tried to cut off the conversation by saying what he has since 2016, that he couldn't talk about it because he was under audit. Guthrie said there was no law that prevented someone being audited from discussing his taxes, and pressed on: “Who do you owe $421 million to?" she asked.

She jumped in when, during a discussion about White House events where masks were not worn, the president mentioned how he was touched by people at a reception for relatives of military members killed in service.

“Do you believe a grieving military family gave you COVID,” she asked.

She took an unusual amount of time for head-to-head questioning, given that the format called for questions from the audience to dominate the event. She followed up audience questions, too: When Trump talked about health care and maintaining protection for preexisting conditions, Guthrie pointed out that his administration was trying in court to eliminate that.

One look online provided an illustration of Guthrie's effectiveness. Words like “condescending,” “badgering,” “argumentative" and “bully” were used on social media by supporters of the president. Memes popped up with Guthrie's face made to seem like a vampire or devil.

Before an appearance in Florida on Friday, Trump called his experience with Guthrie “small potatoes.”

“If you can't handle Savannah, you cannot handle Putin and President Xi and Kim Jong Un,” he said.

The Nielsen company said Friday afternoon the Biden town hall reached 14.1 million people on ABC between 8 and 9 p.m. and Trump had 13.5 million combined on NBC, CNBC and MSNBC.

Tim Murtaugh, spokesman for Trump's campaign, said even though the commission-sponsored debate was canceled on Thursday, “one occurred anyway.” He said Guthrie played the role of debate opponent and Biden surrogate.

Yet in declaring Guthrie one of the winners in Thursday's night of politics on television, the Vox website said her quick line of questioning, pushbacks and fact checks “probably made the White House wish they had just done the debate.”

Besides giving NBC News executives a reprieve from dealing with online critics' call for a boycott, Guthrie helped restore the honor of the “Today” show. Her former partner, Matt Lauer, received wide criticism in 2016 for his questioning during back-to-back interviews with Trump and Hillary Clinton.

NBC News said it wouldn't make Guthrie or network executives available to speak about the performance on Friday.

More than anyone, Axios' Swan understands the high stakes involved when interviewing Trump.

“There's no question, because the scrutiny of every interview he does is so intense, that you can do enormous damage to yourself if you're not well-prepared," he said.