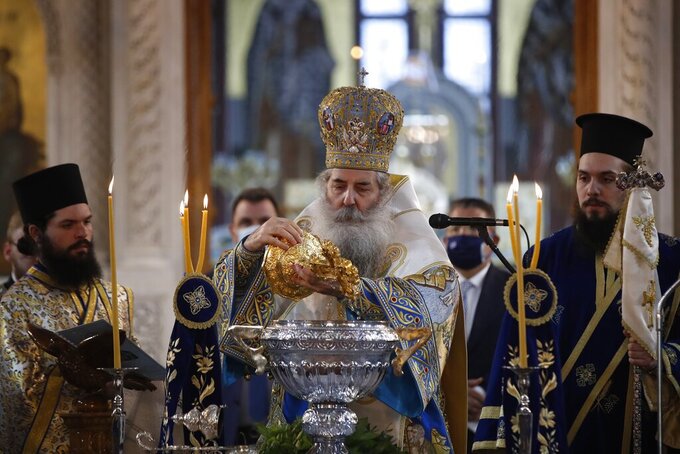 Metropolitan of Piraeus Seraphim immerses a cross into the water during the service for the feast of the Epiphany in the Church of the Holy Trinity in Piraeus, the port of Athens, Wednesday, Jan. 6, 2021. The Greek government relented and allowed limited attendance at churches celebrating the feast of the Epiphany on Wednesday, reversing a ban on attendance designed to limit the spread of the coronavirus. (AP Photo/Thanassis Stavrakis)

ATHENS, Greece (AP) — The Greek government relented and allowed limited attendance at churches celebrating the feast of the Epiphany on Wednesday, reversing a ban on attendance designed to limit the spread of the coronavirus.

Not all churches opened their doors to the faithful during services but, in those that did, congregations were limited from 25 to 50 people, for the largest churches, and, in some cases of overflow, the faithful were allowed in, a few at a time, for private prayers after the service was over.

As per a previous agreement between the Greek Church and the government, the traditional blessing of the waters conducted each year on the Epiphany, on Jan. 6, took place inside the churches and not in the open, in rivers and beaches, as is customary.

The Orthodox Church celebrates Jesus’ baptism during the Epiphany.

The Holy Synod of the Church of Greece had reacted angrily Monday to the ban which was imposed, without consultation, they claimed, the previous Saturday and had decided unanimously it would openly challenge it. The government had also responded strongly, saying no one can choose which laws to follow.

During Christmas, churches operated under the same restrictions they did Tuesday. A few priests who had flouted the rules concerning limited attendance, social distancing and mandatory masks for the congregation had been arrested, fined 1,500 euros ($1,840) and given three-month suspended sentences, while congregants were fined 300 euros (about $370) each.

In the end, both sides appeared to draw back from open conflict. Prime Minister Kyriakos Mitsotakis and Archbishop of Athens Ieronymos met Tuesday during the swearing-in ceremony of the new ministers appointed in Monday’s Cabinet reshuffle and are said to have discussed the issue. Police were present outside churches Wednesday, but were told by their superiors to be discreet and limit themselves to “suggestions.”

In the northern city of Thessaloniki, where there is a stronger presence of religious zealots, some called for the blessing of the waters at sea, near the city’s iconic White Tower. Police and coast guard forces are spread across the city’s waterfront to prevent the event from taking place. One person was arrested and nine detained.

Greece has tightened its lockdown until Jan. 11 to allow schools to reopen on that date. Retail shops and hairdressers that were open for the holidays were shut down and churches were supposed to close, as well.

Associated Press journalsits Thanassis Stavrakis in Athens and Costas Kantouris in Thessaloniki contributed to this report.