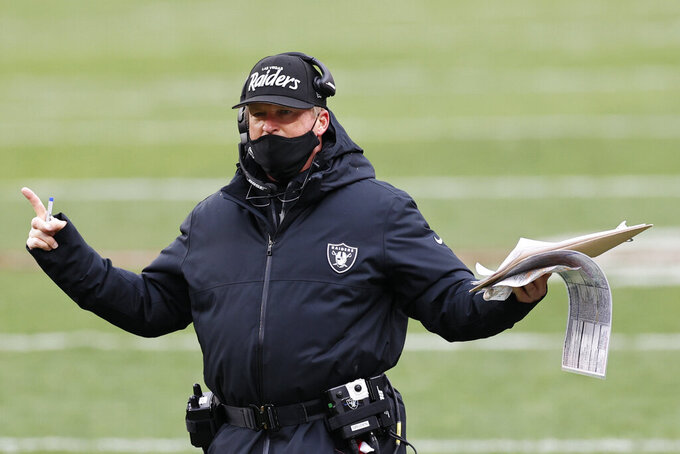 Coach Jon Gruden defended the way the Las Vegas Raiders have handled the coronavirus despite the organization being hit with a hefty penalty for violations from the league.

A person familiar with the punishment said the team was fined $500,000, Gruden docked $150,000 and the team stripped of a sixth-round draft pick because of how the Raiders handled Trent Brown’s positive coronavirus test last month. The person spoke on condition of anonymity because no announcement had been made.

“I’m just going to say, very proud of our organization, how we have handled this entire protocol and this entire process and I’m not going to comment any further than that,” Gruden said Friday. “I believe we’re on the cutting edge of being the best at servicing players and I’ll leave it at that.”

The Raiders are appealing the penalty.

The organization has been penalized several times already this season for violating coronavirus protocols with the punishments leading to a total of $1,215,000 for the team, Gruden and players.

Gruden wouldn’t comment when asked if he believed the team was being singled out by the league.

While several teams have been fined so far this season, the Raiders are the first to be docked a draft pick following multiple violations.

At a practice on Oct. 19, a day before Brown tested positive, he was not wearing a mask as required and didn’t socially distance from teammates. That led to four other starting offensive linemen being placed on the COVID-19 list as “high-risk” contacts. They missed the rest of the practice week before returning the morning of a 45-20 loss to Tampa Bay on Oct. 25.