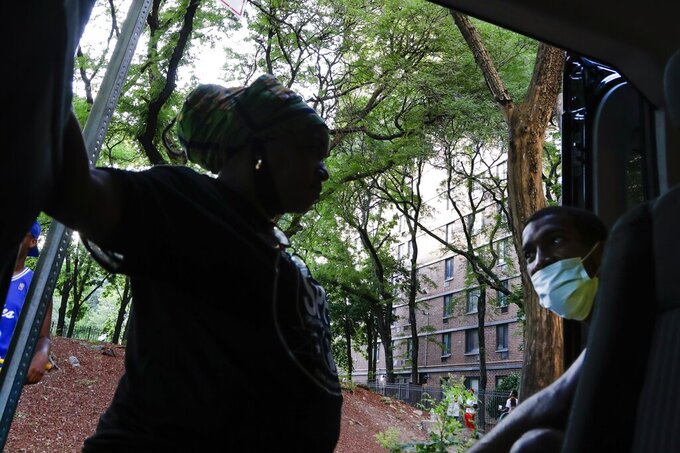 FILE - In this Saturday, July 18, 2020, file photo, Iesha Sekou, left, founder and CEO of Street Corner Resources talks to a young man while visiting and observing potential areas of conflict and gun violence, in the Harlem neighborhood of New York. A rise in gun violence in cities across the U.S. is testing the limits of anti-violence groups that have been calling for more government funding for decades. President Joe Biden acknowledged earlier this year that community anti-violence programs have been woefully underfunded and has proposed $5 billion in new aid for them. (AP Photo/Frank Franklin II, File)

HARTFORD, Conn. (AP) — During a particularly violent week in Connecticut’s capital city, Andrew Woods was among a small number of anti-violence workers who rushed in to help victims’ families, offering condolences and referrals to services while trying to discourage retaliation.

Three people were killed and about a dozen others injured in shootings in Hartford over the week that began in late May — a large number in a small city of about 120,000 people, which left local anti-violence groups reeling.

The group that Woods leads, Hartford Communities That Care, has eight anti-violence workers. With more funding, he said he would quadruple that number to allow employees to work in shifts instead of being on call around the clock.

“We’re overwhelmed by the sheer number of shootings and then the follow-up that is involved in that,” he said. “We’re on call 24/7, 365 days a year. It’s unsustainable to have people working these kinds of hours.”

A rise in gun violence seen in cities across the U.S. is testing the limits of anti-violence groups that have been calling for more government funding for decades.

President Joe Biden acknowledged earlier this year that community anti-violence programs have been woefully underfunded and proposed $5 billion in new aid for them in his massive infrastructure plan, along with hundreds of millions of dollars for them in other parts of the federal budget. In a statement in April, the White House said such programs have been shown to reduce homicides by up to 60% where they operate.

“Cities across the country are experiencing a historic spike in homicides, violence that is greatest in racially segregated, high-poverty neighborhoods,” the statement said. “Black men make up 6% of the population but over 50% of gun homicide victims. Black women, Latinos, and Native Americans are also disproportionately impacted.”

“It has to be well-rounded,” said Paul Carrillo, director of the Community Violence Initiative at the Giffords Law Center. “If you’re going to hire more police, OK, it should be something to the effect where … whatever your police budget is, X% should also be toward this violence intervention work.”

In the first three months of 2021, there were 983 homicides in 24 U.S. cities monitored by researchers at the University of Missouri-St. Louis for reports prepared for the National Commission on COVID-19 and Criminal Justice. The number was 193 higher than in the first quarter of last year and 324 higher than in the first quarter of 2019. Last year’s increase in homicides was likely due to the coronavirus pandemic, social unrest and other factors, according to a research report by criminal justice professor Richard Rosenfeld and graduate research assistant Ernesto Lopez Jr.

Researchers said the average homicide rate of the cities rose sharply after the police killing of George Floyd in Minneapolis in May 2020, which sparked nationwide protests. The rate dropped in the fall and the beginning of this year, but is still higher than it was before the summer of 2020.

Among the groups responding to an uptick of gun violence in Chicago is BUILD, an organization that deploys intervention teams to canvas hot spots, a crisis response unit that supports survivors and families of victims, as well as therapists and case managers who support over 200 families.

“An increase in funding would help us to increase capacity. To do that work it is very consuming, emotionally draining work. You need more people out there engaged,” said Bradly Johnson, a BUILD spokesperson.

In Hartford, 55 people had been shot as of May 15, up from 45 during the same period last year, according to the latest data kept by city police. Eighteen people have died in homicides as of June 17, a number on track to surpass last year’s 25 homicides.

Community leaders in Hartford and other cities have applauded Biden’s proposed new funding for anti-violence programs and are cautiously optimistic as the infrastructure plan is negotiated with Republicans on Capitol Hill.

“We pray that the $5 billion will remain intact and is not diluted,” Woods said. “It would really be a shot in the arm for those of us who do this work across the nation.”

Anti-violence groups around the country are reporting being overwhelmed during the spike in violence.

Iesha Sekou, chief executive of Street Corner Resources in the Harlem section of New York City, has had to adjust the schedules of its eight anti-violence outreach workers, including having staff come in later and work split morning-evening shifts.

“It’s become a little more challenging because we are responding more often to brutal beatings, stabbings and shootings and jumpings that come into the trauma unit of Harlem Hospital,” said Sekou, whose group receives annual funding from the city through reimbursements but has struggled to secure the up-front funds.

In Connecticut, retired police officer Stacy Spell runs Project Longevity’s New Haven program, a partnership between community groups and police aimed at reducing violence. His office only has four paid staff. In 2017 he said he went seven months without being paid because of a monthslong impasse on the state budget.

Like other anti-violence program leaders, Spell said he has had to lay off staff because of funding declines in previous years. Funding from government agencies and philanthropic groups has increased in recent years, but he said more is needed to adequately fight violence.

“If we’re to move past addressing the violence that is happening not only in the city of New Haven, but happening in all the major cities of Connecticut as well as every urban city in the country … we need millions of dollars that go to grassroots organizations so they can play a more effective role,” he said.