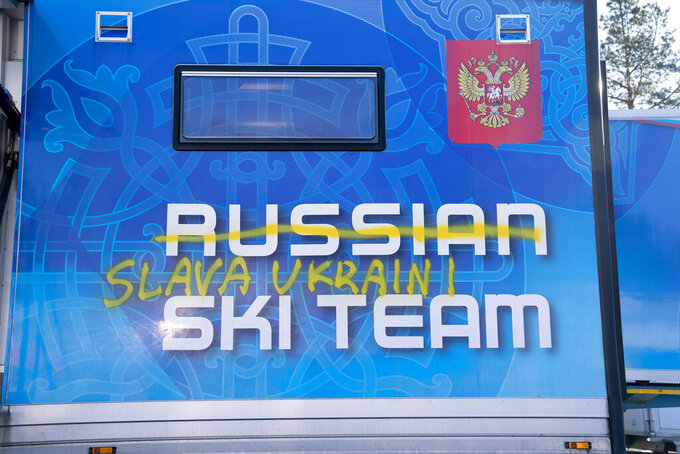 Writing reading "Glory to Ukraine" is seen on the side of the trailer of the Russian cross-country national team, in Holmenkollen. near Oslo, Wednesday, March 2, 2022. In Norway, Russian cross-country skiers, who won 11 medals at the Beijing Olympics, were heading home after being excluded from competition by the International Ski Federation, known as FIS. The decision came after a three-day standoff with Norwegian ski officials, who said they would refuse to let Russians and Belarusians race if FIS maintained its previous policy of allowing them to compete as neutral athletes. (Torstein Boee/NTB scanpix via AP)

Russia has been banned from international gymnastics and curling events in response to its invasion of Ukraine.

The International Gymnastics Federation on Friday said Russian and Belarusian athletes or officials, including judges, will not be allowed to participate in sanctioned competitions, indefinitely.

The World Curling Federation has banned Russia from its championships for the rest of the season.

Both sports had previously canceled events scheduled in Russia.

International sports organizers have scrambled to deal with the repercussions of Russia’s invasion of Ukraine, which began shortly after the end of the Beijing Olympics.

The Paralympics began on Friday without Russians or Belarusians after other athletes threatened to boycott rather than compete against them. Russia was also banned from upcoming World Cup soccer qualifying matches.

Most major sporting events scheduled to take place in Russia have been pulled.

The gymnastics federation had already canceled all World Cup and World Challenge Cup events scheduled for Russia and Belarus, a close ally of Russia where troops were deployed before the invasion of neighboring Ukraine. The new decision banned their athletes from upcoming events.

The French soccer league decided Friday to suspend coverage of its league in Russia with broadcaster Match TV.