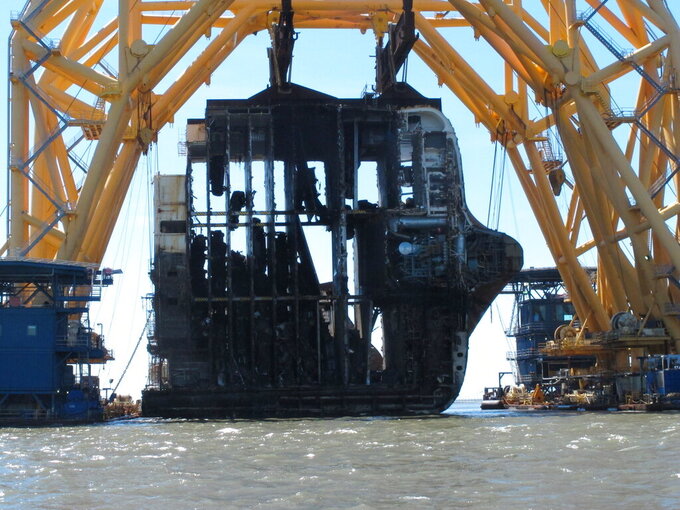 Interior decks of the capsized cargo ship Golden Ray are exposed on Monday, April 26, 2021, after the engine room section was cut away and separated from the rest of the shipwreck by a towering crane, offshore of St. Simons Island, Ga. The South Korean vessel capsized with roughly 4,200 vehicles in its cargo decks in September 2019. The engine room section is the fourth giant chunk of the ship to be cut away and removed since demolition began in November 2020. (AP Photo/Russ Bynum)

BRUNSWICK, Ga. (AP) — Demolition of a cargo ship that overturned on the Georgia coast reached the halfway mark Monday as a towering crane lifted the vessel's engine room section away from the rest of the shipwreck for removal by barge.

The South Korean freighter Golden Ray capsized soon after leaving the Port of Brunswick on Sept. 8, 2019. Work to remove the ship by cutting it into eight giant chunks began nearly six months ago in November.

The multi-agency command in charge of the salvage told reporters Monday the job won't be finished any time soon. They plan to keep working well into the Atlantic hurricane season that starts June 1.

“We’re definitely going to be here for several more months," said Mauricio Garrido, president of T&T Salvage, the salvage contractor hired to dismantle the wreck. "It would be tough to pin down a date.”

Before demolition began, the Golden Ray measured 656 feet (199 meters) long, too big to remove intact. Experts soon settled on a plan to carve the ship into eight massive chunks, each weighing up to 4,100 tons (3,720 metric tonnes).

Crews have straddled the ship with a floating crane that uses a winch and pulley system attached to 400 feet (122 meters) of anchor chain to tear through the ship’s hull with brute force.

The engine room section — the fourth to be cut away — by far proved the toughest. Crews began cutting on that section in February, and had to pause several times as its thicker, fortified steel snapped links used to connect the cutting chain and forced extensive maintenance.

They moved on to cut away a different chunk on the opposite end of the ship in March before resuming the engine room cut, which wrapped up over the weekend.

Three more cuts have to me made to divide the wreck into its final four pieces.

“It would be unrealistic to expect the next three cuts will go flawlessly,” Garrido said. "I expect we will have new challenges.”

The wreck site is surrounded by a mesh barrier intended to contain debris for cleanup once the big sections get removed. Boats equipped with skimmers and absorbent booms stay on standby to mop up any leaking oil or other pollutants.

The latest cut severed the ship's fuel line near the engine room. Though most of the fuel had been siphoned from the ship before demolition began, officials estimated up to 44,000 gallons (166,500 liters) could remain. Workers spotted some oily discharges and sheen after the engine room was cut away, and those were rapidly cleaned up. But no major leaks had been reported.

“The impact to the environment as a whole has been less significant than we feared,” said Doug Hayman, director of the Coastal Resources Division of the Georgia Department of Natural Resources.

The Golden Ray's cargo decks held roughly 4,200 vehicles when it capsized. The multi-agency command estimates roughly 1,000 of those cars have been recovered, either by plucking them from the ship's open ends using a mechanical claw or by fishing them out of the water.

Meanwhile, about 2,700 pounds of debris from the wreck — largely auto parts including rear bumpers, roof mounts and cupholders — have been collected by crews surveying the shoreline, said Tom Wiker of Gallagher Marine Systems, the company working on the salvage operation on behalf of the ship's owner, Hyundai Glovis.

Last year, the coronavirus pandemic and a busy hurricane season caused the multiagency command to push back the start of demolition operations by several months from mid-July to early November.

Salvage workers have been sequestered at a nearby resort and only 30 virus infections have been reported out of about 7,500 who have worked on the wreck site, said Coast Guard Cmdr. Efren Lopez.

He said crews are prepared to work through the hurricane season, pausing only if a storm threatens the Georgia coast. The portion of the ship that remains partly submerged off St. Simons Island appears stable enough to withstand severe weather, he said, and crews will be able to fan out and recover any scattered debris if necessary once a storm passes.

“We have no intention of shutting down operations for the hurricane season,” Lopez said.