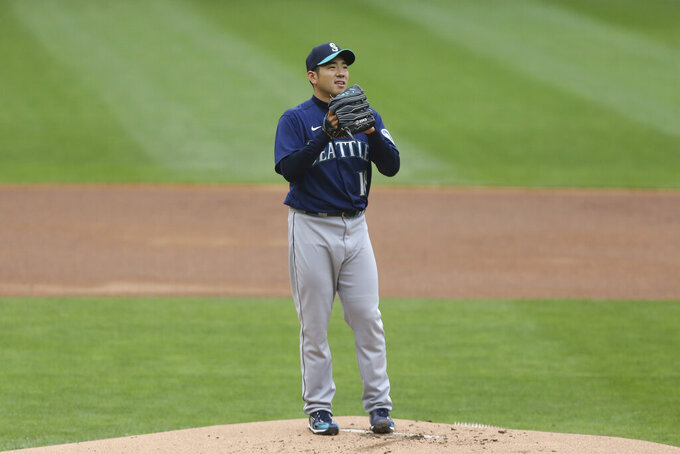 Seattle Mariners pitcher Yusei Kikuchi (18) stands on the mound during the first inning of a baseball game against the Minnesota Twins, Saturday, April 10, 2021, in Minneapolis. (AP Photo/Stacy Bengs) 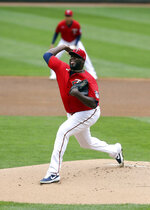 MINNEAPOLIS (AP) — Baseball's speed-up-the-game rule that starts each extra inning with a runner on second base has not been user-friendly for the Minnesota Twins.

The 10th has been nothing but trouble, this time caused by the Seattle Mariners.

Mitch Haniger homered and hit the go-ahead sacrifice fly in the 10th inning, giving the Mariners a 4-3 victory over the Twins on Saturday.

“You've just got to keep grinding away,” Haniger said. “Close games, usually they're just decided by one swing."

The rulebook is more of a factor now, too, as it was last year when the pandemic-shortened season prompted some tweaks. All three of Minnesota's losses this season have come in the 10th.

“The game, as we are used to playing it, does change, and we have to adapt to that,” Twins manager Rocco Baldelli said.

True to his unflappable form, Baldelli was not worried about the trend: “We’re talking bunts. We’re talking choppers. We’re talking putting the ball in play, making a play in the field, and that’s the difference between a win or a loss. Sometimes it stings.”

Taylor Trammell, whose first career homer came earlier in the game, was the inning-starting runner in the 10th. Twins reliever Taylor Rogers (0-1) picked up Braden Bishop's bunt in front of the mound, but he couldn't get a clean grip and held off on a throw as a precaution. Haniger then hit a one-out fly deep enough to left for Trammell to come home.

“It’s tough,” said Rogers, the team's union rep. “It’s just the way it’s set up right now, and not much you can do about it.”

Kendall Graveman (1-0) worked the ninth for the victory and Keynan Middleton pitched a perfect 10th for the save, after closer Rafael Montero let the Twins tie the game without a hit in the eighth. Nelson Cruz walked, and pinch runner Jake Cave eventually scored the tying run on a wild pitch.

Kyle Seager's two-out, two-strike single in the eighth inning had given the Mariners the lead they first built in the third inning when Trammell and Haniger went deep. Michael Pineda shook off the power surge and finished six innings with only two other baserunners. The Mariners were outhomered 13-3 over their first seven games.

Twins starters have the best ERA in the majors at 1.88 and have yet to lose a decision. They are 5-0 in eight games.

With an ominous injury to James Paxton — a strained left forearm that can be a precursor to elbow reconstruction — and struggles by opening day starter Marco Gonzales, the Mariners' rotation entered the game ranked 26th in baseball in ERA.

The Mariners needed a lift like this from Kikuchi, their lefty with the jerky leg kick whose increased velocity this spring has helped him progress following two underwhelming seasons to start his major league career.

“He feels really good about where he’s at, the adjustments he’s made and the growth that he’s made, not just with his pitches but his approach, his attitude when he’s out there,” manager Scott Servais said, adding: “We’re going to need many, many more outings like that out of him.”

Mariners: Paxton will get his second medical opinion on Monday, with the possibility of Tommy John surgery still looming. ... CF Kyle Lewis, the AL Rookie of the Year in 2020 who has yet to play this season because of a bone bruise on his right knee, has increased his activity and intensity, with favorable reviews of his progress, Servais said.

Twins: 3B Josh Donaldson (mild right hamstring strain) moved closer to a return next week, taking groundballs and batting practice in the morning. He'll get some at-bats in simulated game situations at the alternate training site first, but he's eligible to come off the injured list on Monday. ... Players and staff received single-shot COVID-19 vaccinations on Thursday, with the club coming much closer to the desired 85% threshold than initially anticipated, Baldelli said.

Twins: RHP Matt Shoemaker (1-0, 1.50 ERA) takes the mound in the series finale. He gave up just three hits in six innings in his debut with the team on Monday at Detroit.