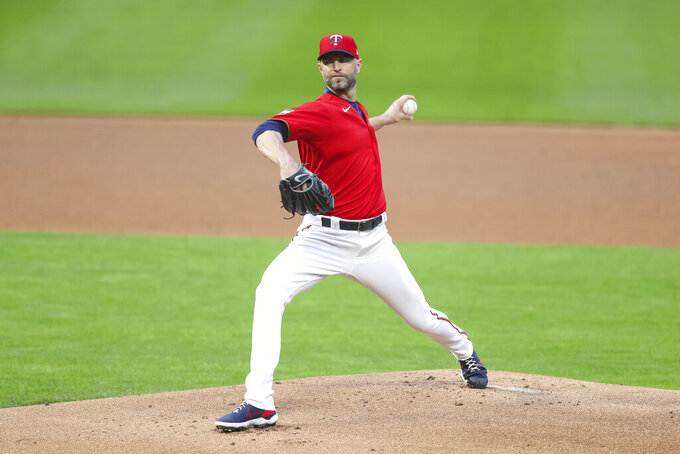 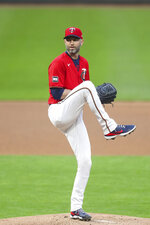 MINNEAPOLIS (AP) — J.A. Happ was skipped in his previous turn in Minnesota's rotation, when virus protocols prompted postponements of three straight games for the Twins.

Back on the mound after a nine-day break, the left-hander pitched like he never wanted to leave.

Happ lost his bid for a no-hitter when Jacob Stallings doubled with one out in the eighth inning, and the Twins beat the Pittsburgh Pirates 2-0 on Friday night.

“You use everything around you for motivation,” Happ said, "so I was ready.”

Happ, in his first season with the Twins, was immediately removed by manager Rocco Baldelli with a two-run lead and replaced by Tyler Duffey.

“There was going to be no hesitation to let him finish the game if there were still no hits on the board,” said Baldelli, who pulled José Berríos from a no-hitter after six innings at Milwaukee in the second game of the season, when the Twins also won 2-0 with a one-hitter.

Willians Astudillo and Jake Cave each hit their first home runs of the season for Minnesota, spoiling another stellar start by JT Brubaker (2-1). The right-hander finished seven innings with five hits and no walks allowed.

Not so much to Stallings on that full-count, four-seam fastball in the eighth that Pittsburgh's catcher stroked to left field to snap an 0-for-19 skid.

“I feel like in that situation all the pressure is on the pitcher,” Stallings said. “I just wanted to make him work.”

Duffey walked Wilmer Difo next, but he struck out Adam Frazier with runners at second and third to end the eighth.

Duffey retired the first batter in the ninth, too. Then Taylor Rogers took the last two outs for the save to finish the one-hitter, preserving just the second win for the Twins in their last 11 games.

After the COVID-19 outbreak they endured during the road trip, which was capped on Wednesday by a crushing 13-12 loss at Oakland in 10 innings, the Twins needed this pick-me-up from Happ in the worst way.

“He’s very comfortable after all these years with how to go out there and do his job. He’s comfortable, seemingly, in every situation. It was a wonderful night,” Baldelli said.

Happ, who left New York and signed a one-year, $8 million contract this winter after expressing disappointment by being squeezed out of the Yankees' rotation, once pitched a two-hitter for Houston against St. Louis on Aug. 30, 2010, his career-low-hit complete game. The Twins are his seventh major league team.

“It turned out to be a fun one tonight. It doesn’t always, but I just wanted to do my part," Happ said.

Happ's bid for the no-no caught quite a break in the fifth, when Difo hit a comebacker that he tried to scoop with his glove.

The ball ricocheted toward third base, where Happ hustled and used a slide to grab the ball in the grass. His throw, which likely would have been too late, went wide of first and into foul territory.

But instead of getting an error and allowing Difo to reach second base, Happ was off the hook when home plate umpire Jose Navas called Difo out for straying too far inside the base line and thus interfering with the throw.

The last no-hitter by a Twins pitcher was Francisco Liriano on May 3, 2011, at Chicago against the White Sox. Target Field, in its 12 seasons, has yet to host one.

The Twins placed Miguel Sanó on the injured list with a strained left hamstring before the game and promoted outfielder Alex Kirilloff among a handful of roster moves. Kirilloff, the team's first-round draft pick in 2016 and one of the game's top prospects, is a native of Pittsburgh.

“It’s just a cool experience, just to see the team you grew up rooting for in the other dugout,” said Kirilloff, who made his major league debut in the playoffs last year. “I’m not really rooting for them today. I don’t think anyone can blame me for that.”

Pirates: 3B Ke’Bryan Hayes had his inflamed left wrist examined on Thursday and was “doing better,” Shelton said.

Twins: SS Andrelton Simmons, the first of five players to land on the COVID-19 injured list, has cleared protocols and could return to action next week after ramping up his activity, Baldelli said.