Harden must quarantine until Friday; could play in opener 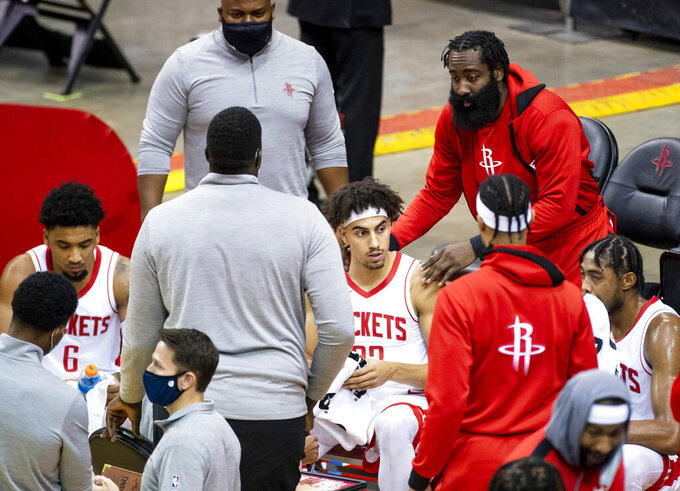 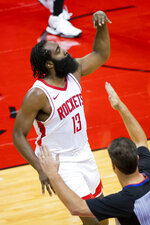 James Harden will be in quarantine until Friday, meaning the Houston Rockets star and three-time reigning NBA scoring champion could be eligible to play Saturday when his team is to finally open its season in Portland.

The Rockets were scheduled to play Wednesday against Oklahoma City, a game postponed for a variety of coronavirus issues. Among them was Harden declared unavailable to play after the NBA determined he violated the league's health and safety protocols.

Meanwhile, the league announced Thursday that of the 558 players tested for COVID-19 in the week starting Dec. 16, there were two new confirmed player positive tests.

But the Rockets-Thunder game is the only one to be postponed so far this season.

“Nothing about this was predictable or ideal," Thunder coach Mark Daigneault said Thursday after his team's practice in Oklahoma City.

The Thunder will now open Saturday at Charlotte.

“I'm really pleased with the mentality that the whole organization, including the team, took to the circumstance," Daigneault said.

The NBA’s medical staff determined Harden needed to quarantine for four days, which started Tuesday, before he can return to practice, games or team activities. The league was still reviewing to see if any other quarantine decisions were needed for other Rockets players.

Under NBA rules, a team needs eight healthy players to play, and the Rockets were one short Wednesday. They have 16 players on the roster, and nine were out: One was injured; three returned tests that were either positive or inconclusive for coronavirus; four other players are quarantined as part of the virus protocols; and Harden was ineligible.

Harden was fined $50,000 on Wednesday by the NBA, which said he violated protocols. The league prohibits attending indoor social gatherings of 15 or more people or entering bars, lounges, clubs or similar establishments.

Video of the disgruntled star surfaced on social media, where he was shown without a mask at a crowded party in a private event space Monday night. Harden, in a since-deleted Instagram post, explained why he was at the event.

He wrote: “One thing after another. I went to show love to my homegirl at her event (not a strip club) because she is becoming a boss and putting her people in a position of success and now it’s a problem. Everyday it’s something different. No matter how many times people try to drag my name under you can’t. The real people always end up on top.”