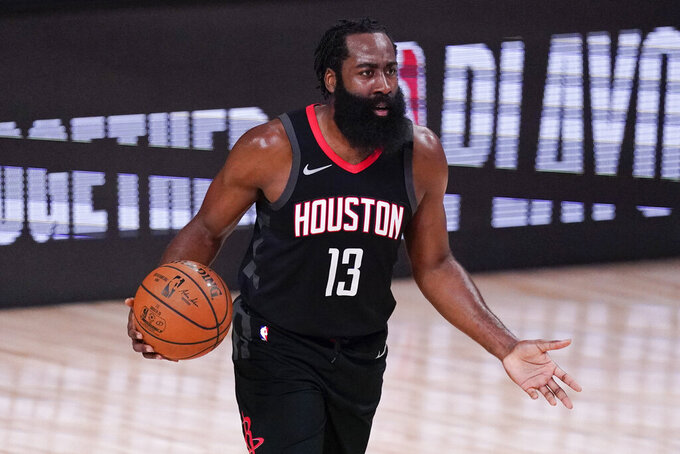 FILE - In this Sept. 12, 2020, file photo, Houston Rockets' James Harden (13) argues a call during the first half of an NBA conference semifinal playoff basketball game against the Los Angeles Lakers in Lake Buena Vista, Fla. Harden has not reported to training camp with the Rockets and coach Stephen Silas says he did not know when the All-Star guard would arrive. The Rockets had their second workout of training camp on Monday, Dec. 7, 2020, and afterward the new coach addressed the absence of the disgruntled star who reportedly wants to be traded. (AP Photo/Mark J. Terrill, File)

HOUSTON (AP) — James Harden practiced with the Houston Rockets on Monday for the first time this season after missing the early part of camp while talk swirls that he wants out.

Harden reported to camp late amid reports he is looking to be traded. He was absent for Houston’s first two preseason games as he went through the NBA’s COVID-19 testing protocols.

Coach Stephen Silas said he spoke with the superstar Monday, but they talked strictly basketball and neither addressed a possible trade.

So far asking Harden anything hasn’t been an option — the Beard hasn’t spoken to reporters since reporting to camp.

Silas said that Harden will make his preseason debut Tuesday night when the Rockets host the Spurs.

The Rockets traded Russell Westbrook to Washington for John Wall and a first-round pick on Dec. 2 to cap a short offseason that was plagued by rumors that both Westbrook and Harden wanted to leave Houston. Some thought the Westbrook trade would change Harden’s mind about the Rockets, but the reports that he wants to leave have persisted in the almost two weeks since the deal.

Silas, in his first year in Houston after taking over for Mike D’Antoni, has said he expects Harden to be “all in” this season. The coach also denied that speculation about the eight-time All-Star's future has been a distraction to the team.

“It’s been something that the media has been talking about quite a bit and I’ve had to answer a lot of questions about it,” Silas said. “But as far as our growth and our pushing forward this season, we’ve been right on pace.”

Veteran P.J. Tucker also practiced Monday after missing the first two preseason games. He is being worked in slowly after he reported to camp a day late.

Tucker is in the final year of a four-year, $31.8 million contract and some have suggested he is also unhappy in Houston because he hasn’t been given an extension. He did speak to reporters Monday but didn’t provide much clarity on the situation.

“It not even just in the contract extension,” he said. “That’s not the total goal. The goal is to be in a place where you you’re wanted, where you want to be ... that’s what every player wants. No one wants to be somewhere they don’t want them. And there’s certain ways to show that and it’s not just contract extensions.”

Tucker was asked if he feels the Rockets no longer want him.

“You should ask them. Because you’re asking me a question about what they think, and I can’t tell you,” he said.