Hawaii governor asks residents to 'do more with less' 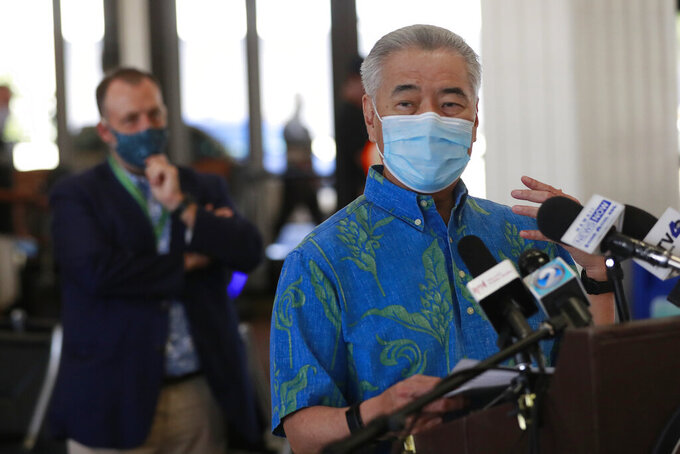 “Government will have to tighten its belt; our citizens will be asked to do more with less; and we will all need to help each other,” Ige said in his annual State of the State address.

The governor offered few specifics for how he proposed to address the budget shortfall in the upcoming fiscal terms. Instead, he said “the best answers lie in the ones that we arrive at together — not in spite of each other, but because of each other.”

Hawaii's general fund tax revenues are not expected to return to pre-pandemic levels until 2024.

But the state Council on Revenues earlier this month said it expects revenue to decline just 6.5% during the current fiscal year, less than the 11% drop it had projected in September. It attributed the improved outlook to the tourism industry's modest gains since the state adopted a COVID-19 testing program for travelers.

Normally Ige delivers State of the State speech to lawmakers at the state Legislature. This year, to limit the spread of the virus, he spoke in front of a camera at a podium in his executive office chambers and his address was broadcast on television and online.

He told reporters afterward that he's hoping to minimize layoffs as much as possible, even though his initial budget proposal called for laying off 149 people. Ige said he's trying to reassign workers in these positions to fill openings in other parts of state government.

Restructuring possibilities include eliminating the Office of Aerospace Development and putting its functions under the University of Hawaii which is pursuing some similar work, she said. Another would be to combine the Land Use Commission with agencies that also address sustainable development like the Office of Environmental Quality Control.

“A lot of those discussions I know will be difficult and painful, but it is something that we have to do,” she said.

Senate President Ron Kouchi echoed the need for restructuring, saying the government will need to look at different ways of providing services.

“It is clear that we are not going to have an economic recovery that can sustain government in its current form,” Kouchi said.

As for tax increases, Kouchi said the only idea that lawmakers seemed to be discussing was a potential hike on those with higher incomes.

Lawmakers criticized Ige's speech for being short on specifics. House Majority Leader Rep. Della Au Belatti said his speech “was not useful” for the Legislature because it lacked details on how to bring back the tourism industry.

The governor stressed his commitment to connecting rural communities — like Puna, Hana, Nanakuli and Kapaa — with broadband internet to reduce inequalities in broadband access in the state.

Technology and the digital economy, he said, will be one way for Hawaii to become less dependent on tourism. That, and the rise of remote work options, will make it possible for Hawaii workers to compete globally and to stay in the islands for work instead of leaving for the mainland to get good jobs, he said.

The governor reiterated plans launched last year to build affordable housing on state-owned land that would be sold to residents as leasehold units. He said construction projects funded by the state and federal governments, including new schools, would help the economy.