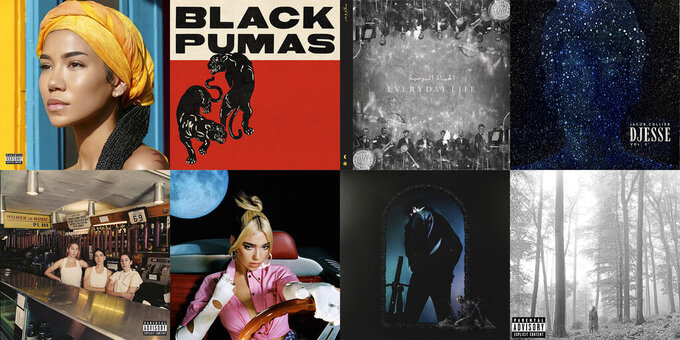 NEW YORK (AP) — Putting out music in a pandemic, without the ability to connect directly with fans through touring, felt sort of like a tree falling in the forest with no one around to hear it.

Experiencing music in 2020 became a solo experience, for good and for bad, and music that was able to transcend the physical bubbles we all put around ourselves felt rare and special. In some ways, the Grammy nominees represented that difference with albums and music meant for self-exploration or dancing like no one was watching. And sometimes the omissions speak volumes.

The Grammys will air on March 14.

FEKADU: Congratulations Taylor Swift, you will make history and become the first female artist to have three albums win album of the year at the Grammy Awards. Though “folklore” is the best of this bunch in my opinion — with Jhené Aiko a close second — the issue here is that the Recording Academy has designed a swift win for Tay Tay. The Grammys didn’t nominate Swift’s last two albums for this honor, and they are making up for it this year with easy competition. While Dua Lipa and Post Malone had multiple hits, that won’t be enough for them to win this. No shade, and as much as I love HAIM, Black Pumas and Jhené, do you really think they have a chance of winning here? No. And who even remembered that Coldplay dropped an album? There’s a small chance that the uber talented Jacob Collier — if you don’t know him LOOK HIM UP! — could win, but it’s not likely. If the academy wanted to really challenge Swift and “folklore,” they would have nominated critically acclaimed albums from Fiona Apple, Brittany Howard, Tame Impala or even The Weeknd — acts who have a real shot at winning.

HALL: I'm sending you a virtual fist-bump, Mesfin. When I look at this list, I think more about the albums I loved that weren't nominated. While Swift's introspective pandemic album definitely deserves to be in this category, “folklore” feels like a safe, obvious choice for voters. We've seen artists (cough cough, Fiona, cough cough, Run the Jewels) take great creative leaps and bounds and yet we're served up a pre-packaged win. That being said, there are sometimes under-the-radar wins in this category, so I think HAIM's complex and intriguing album has a chance (however slight) to win.

HALL: Three words, “Classy, bougie, ratchet,” propelled Megan Thee Stallion to viral fame with an insanely catchy song while her fellow Houston native added fire to the remix. Rap songs don’t often win in these top categories and with Beyoncé and DaBaby also competing for votes, I predict one of the most popular songs of the year probably isn’t going to win here. Dua Lipa put the dance club in our bedrooms this year with “Don’t Start Now” and she’ll walk away a winner.

FEKADU: That's a smart choice, Kristin! Normally I would think Dua Lipa — who is this decade's Katy Perry (no Grammy wins) — wouldn't have a chance here. But then I remembered that Dua won best new artist over H.E.R. and Luke Combs, and also picked up best dance recording that year, which proves voters really like her. Still, “Don't Start Now" won't win now. My mind tells me Beyoncé will win her first record of the year honor, but my body says Billie will win her second.

HALL: I am not really feeling a Grammys 2020 redux this year. And where is “Blinding Lights"? Nevertheless, “Black Parade” is a well-crafted cinematic celebration that evokes the history of Black music. Even without releasing an album last year, Beyoncé is still dominating the Grammys and I think she has a resonating and timely message.

HALL: While the records from Andress and Bridgers were an emotional salve during a tough year, Megan’s momentum is unstoppable. She built up to her debut full-length record, “Good News,” with back-to-back hits and huge collaborations on songs like “Hot Girl Summer” with Nicki Minaj and backing up Cardi B on “WAP.” She’s also used her platform in the past year to speak about violence against Black women. This stallion has already won the race.

FEKADU: Let's not forget she got shot in the foot and didn't deserve that! So there will be extra sympathy votes for the rap princess, who deserves this honor more than any other artist.

FEKADU: Let’s start with who won’t win here: sorry Biebs, Tay and Doja. I’m split between Billie, Dua and Harry, but I’m going with “Watermelon Sugar” for two sweet reasons: The song was irresistible and the win will make up for Harry’s snubs in the big three categories.

HALL: I appreciated the subtle (go Google it) sexiness that Styles plays with on “Watermelon Sugar," for sure. T-Swift has been nominated in this category multiple times without a win, which is a bit surprising, but I think voters are going to be drawn to the whisper queen Eilish.

HALL: I don't want to date myself, but seeing all these female rock artist names together makes me long for the late ‘90s Lilith Fair concerts where I felt among a likeminded community. Fiona Apple's return after several long years was personal and unconventional, intimate and experimental, and her exploration in “Shameika” of feeling recognized, even in a small way, by another young girl just zeroed in on all my millennial feelings.

FEKADU: The apple of my eye (and this award): Fiona and “Shameika."

FEKADU: As a card-carrying member of the Beehive — with platinum status — I’m marching in Beyoncé’s “Black Parade.”

HALL: I, too, stan the Queen, but I have fallen in love with “Slow Down” featuring these two young stars. The mixture of their distinct voices and the blending reggae and R&B on a sweet love song is just beautiful. Grammy voters have already crowned H.E.R as the genre's next big star who has been collaborating all over the place, while Marley, the grandson of reggae legend Bob Marley, has shown the apple doesn't fall far from the tree.

HALL: Megan and Beyoncé will not be denied.

FEKADU: I don't want no smoke with B, but there's another rap hit that dominated the year more than “Savage," and that's “The Box." The Grammys love Roddy — he was a newbie and won his first Grammy last year — and “The Box" is also nominated for song of the year and “Savage" isn't. Plus, “The Box" offers one of the best lines, especially necessary during the pandemic era: “Don’t wear no shoes in my house!"

FEKADU: Dan + Shay have won this honor the last two years, and their Bieber-assisted track was a huge pop hit, but I don’t think “10,000 Hours” will win here. This year marks Brothers Osborne’s sixth nod in this category, but they’ll fall short to Old Dominion’s “Some People Do,” a touching tune that’s also nominated for best country song.

HALL: With big hit after hit, I would bet $10,000 on Dan + Shay wining the trifecta in this category. Shay Mooney's vocals are among the best in the genre, while Dan Smyers is a studio whiz. Welcome to Bieber country.