Head of church in Montenegro dies after COVID-19 infection 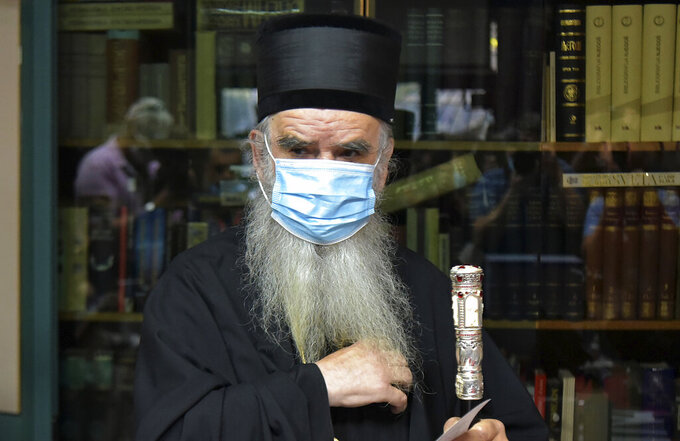 FILE - In this Sunday, Aug. 30, 2020. file photo, Bishop Amfilohije wearing a mask against the spread of COVID-19, prepares to vote in parliamentary elections at a polling station in Cetinje, some 30 km south of Podgorica, Montenegro. Amfilohije, the head of the Serbian Orthodox Church in Montenegro, which led months of protests against the small Balkan state's pro-Western government, has died in hospital after contracting the coronavirus, the church said Friday, Oct. 30, 2020. (AP Photo/Risto Bozovic, File) 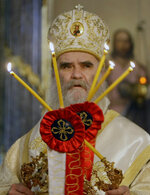 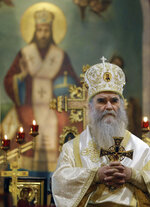 PODGORICA, Montenegro (AP) — The head of the Serbian Orthodox Church in Montenegro, which led months of protests against the small Balkan state’s pro-Western government that was voted out of power in August, has died in a hospital after contracting the coronavirus, the church said Friday.

The condition of Bishop Amfilohije deteriorated on Thursday after he developed heavy breathing and chest pains, doctors said. He had been taken to a hospital in the capital, Podgorica, earlier in October after testing positive for the virus.

The church said the 82-year-old died Friday from pneumonia caused by COVID-19.

Ahead of a parliamentary election in August, followers of the Serbian Church led by Amfilohije staged months of protests against a property law adopted by the parliament in December.

The pro-Russian church argued that the law allows the Montenegrin state to confiscate its property as a prelude to setting up a separate Montenegrin church. The government denied that claim.

The protests, some held in defiance of a ban on public gatherings during the COVID-19 pandemic, managed to galvanize the opposition, which narrowly won the vote.

Amfilohije, known for his staunch anti-Western and pro-Russian political views, played a key role in leading the anti-government protests and putting together an opposition coalition that is currently trying to form the country’s new government.

Montenegro’s prime minister-designate, Zdravko Krivokapic, called on authorities to declare a day of mourning for Amfilohije.

“I am convinced that the church got a (new) saint today,” Krivokapic declared, describing Bishop Amfilohije as “one of the greatest among us in this century.”

President Milo Djukanovic, who was the main target of the anti-government protests, said he was “saddened" by the bishop's death but added that history would judge Amfilohije's “overall activity in Montenegro."

Wearing a traditional bushy beard of Orthodox priests, Amfilohije — whose civilian name was Risto Radovic — was an outspoken supporter of Serb expansionist policies that led to the bloody wars in the Balkans in the 1990's. He was opposed to Montenegro's 2006 independence from Serbia.

Amfilohije once described Muslims as “a false people with a false religion” and was also known for his frequent statements against gay and gender equality groups and abortion rights.