Healthy Ekman-Larsson ready to give Coyotes a playoff boost 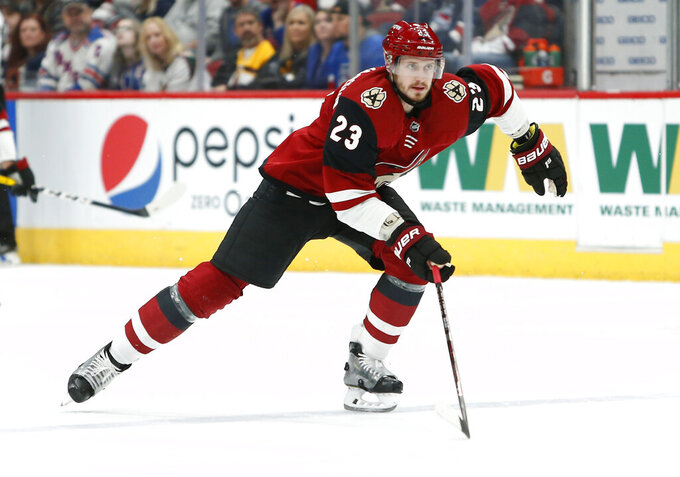 FILE - This Jan. 6, 2019, file photo shows Arizona Coyotes defenseman Oliver Ekman-Larsson skating against the New York Rangers during the first period of an NHL hockey game in Glendale, Ariz. Coyotes captain Oliver Ekman-Larsson labored through the first part of the 2019-20 season as a knee injury lingered. The time off during the NHL's shutdown and a trip home to Sweden allowed the defenseman a chance to heal, giving the Coyotes a boost as the postseason nears. (AP Photo/Ralph Freso, File)

GLENDALE, Ariz. (AP) — Oliver Ekman-Larsson had knee surgery last summer, fully expecting it to help him have a healthy 2019-20 season.

The NHL's shutdown due to the coronavirus pandemic was a huge letdown, but it at least allowed Ekman-Larsson time to get back to full strength.

“These 2 1/2 months have been really good for me,” he said during a conference call this week. "My knee is feeling 100% and I’ve been able to get stronger and faster.”

Ekman-Larsson had another solid season in 2018-19, finishing second on the team with 44 points with 14 goals. He was named to the NHL All-Star team for the fifth time and continued to be one of the NHL's best offensive defensemen.

Ekman-Larsson opted to have offseason knee surgery to help with another lower-body injury and never was quite right this season, his 10th in the NHL.

The break allowed him time to heal, as did a trip back to his home in Sweden.

Unlike Arizona, Sweden did not go on lockdown once the pandemic hit and Ekman-Larsson took advantage, using the time to heal physically and mentally.

“With this virus going around, I haven’t felt so good mentally,” he said. “Going back home and being around my family really helped that situation. I benefited from the physical part of being away. For the mental part, it was nice to get away from it.”

The Coyotes returned to the ice this week to prepare for the resumption of the season.

The NHL and the NHL Players' Association announced Monday a tentative deal on a return-to-play format. Should it be ratified, the league will resume play on Aug. 1 with 24 teams proceeding in an expanded playoff format at two hub cities in Canada.

The Coyotes, the West's No. 11 seed, will open against Nashville in a best-of-five series in their first postseason appearance since reaching the 2012 Western Conference Finals.

“It just feels like it’s a different game," said Ekman-Larsson, the lone remaining player from the 2012 team. "Everybody feels faster and stronger. I don’t know how it’s even possible, but at the same time it’s another level.

“I’m glad that I’ve had the chance to be in the playoffs before. There’s so many good teams and you don’t really know when you are going to have the chance.”

The Coyotes have a chance to make a little noise once they get there.

Ekman-Larsson is healthy, as is Phil Kessel, who struggled with injuries after being traded from Pittsburgh before the season. Arizona also has one of the best goaltending tandems in Antti Raanta and Darcy Keumper, who are both healthy as well.

“For us to get a chance and show that we are good enough to be a playoff team, I think that’s huge for our group moving forward,” Ekman-Larsson said.

A healthy Ekman-Larsson gives them an opportunity to keep moving forward.