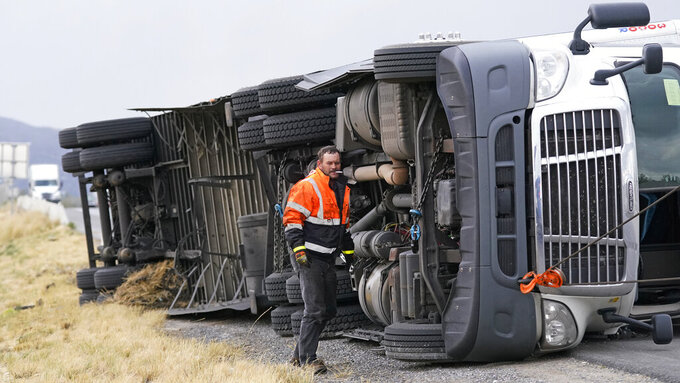 A semi rests in its side after after high winds toppled it on Interstate 15 Tuesday, Sept. 8, 2020, near Bountiful, Utah. Strong winds knocked out power in northern Utah, where temperatures dropped by 40 degrees. (AP Photo/Rick Bowmer)

SALT LAKE CITY (AP) — Summer came to an abrupt halt in parts of the Rocky Mountains on Tuesday as temperatures reaching into the 90s plunged about 60 degrees in less than 24 hours, with a powerful surge of cold air from Canada unleashing snow and damaging winds in several states.

The roller coaster weather ripped up trees by their roots, piled up snow that shut down parts of the scenic road through Glacier National Park and knocked out power to tens of thousands. But the temperature drop is helping with wildfires in Colorado and Montana that had ballooned in hot, windy weather and forced people to flee their homes.

Heat and strong winds also hit California and parts of the Pacific Northwest over the holiday weekend, igniting destructive wildfires.

Snow fell in Colorado, Montana and Wyoming. Far from the ocean and its moderating effect on weather, Colorado is no stranger to extreme shifts. However, Denver’s temperature drop, from 93 on Monday to 32 on Tuesday, is “much earlier than we usually get this,” state climatologist Russ Schumacher said.

The National Weather Service has recorded six other days since 1872 where the temperature dropped by 60 degrees or more in Denver, but they were all during the winter. The latest plunge came after the city hit a record high of 101 on Saturday, one of its hottest days ever in September, he said.

While Schumacher, an associate professor at Colorado State University, believes climate change has been contributing to the heat across the U.S. West that has been fueling wildfires, it's not clear yet whether it's also playing a role in the cold front and the extreme temperature drop.

Josephine Bradbury’s two daughters were looking forward to remote classes after months of missing friends and teachers because of the coronavirus pandemic. But the girls couldn’t log on for their first- and sixth-grade classes, so the family went to their Salt Lake City school for help, fighting whipping wind and passing a broken tree in front of the playground.

“It was literally like a force pushing you,” Bradbury said. “I’ve never seen anything like it before.”

Classes were eventually canceled as thousands of families struggled with power outages.

“You get them all geared up, get their laptops, get them all ready to go, and now they’re not starting until Thursday,” she said.

A utility reported almost 200,000 customers lost power in Idaho, Utah and Wyoming, where portions of Interstate 80 were closed.

Six inches (15 centimeters) or more of snow could fall in the northern and central Rockies, with 1 to 2 feet (30 to 60 centimeters) dropping in the highest peaks, the National Weather Service said. It has issued scattered winter storm warnings and weather advisories from southern Montana to southern Colorado. Freeze and frost warnings also were posted for parts of Montana, Idaho, Colorado, Nebraska, North Dakota and Minnesota.

The cold and snow will help the fight against the Cameron Peak Fire in northern Colorado, which nearly quadrupled in size over the weekend, sending smoke and ash into Denver. The weather was gradually expected to warm up, with temperatures back up in the 80s by the weekend in the Denver area.

In Montana, where the weather began to shift Sunday night, the small city of Red Lodge, a gateway to Yellowstone National Park, had received 10.5 inches (27 centimeters) of snow. Farther north in Glacier National Park, snow closed the higher elevations of the Going-to-the-Sun Road.

A windstorm in western Montana on Monday knocked down trees and power lines and damaged docks and boats on massive Flathead Lake. Ken and Karen Brown, who live in Safety Bay on the southwest side of the lake, told NBC Montana that the community usually lives up to its name but that wind-driven waves took most of the planks off their dock.

“This is probably one of the stronger storms we've had in the 23 years I've been here,” Ken Brown told the TV station.

Warm weather in Montana over the weekend also fueled the rapid growth of a wildfire near the university town of Bozeman, forcing people to evacuate their homes and trapping three firefighters who had to deploy their fire shelters — a last-ditch effort to protect themselves — as the blaze burned over them, the Department of Natural Resources and Conservation said.

After the fire passed, they were able to walk out of the area and were taken to the hospital for evaluation, The Great Falls Tribune reported.