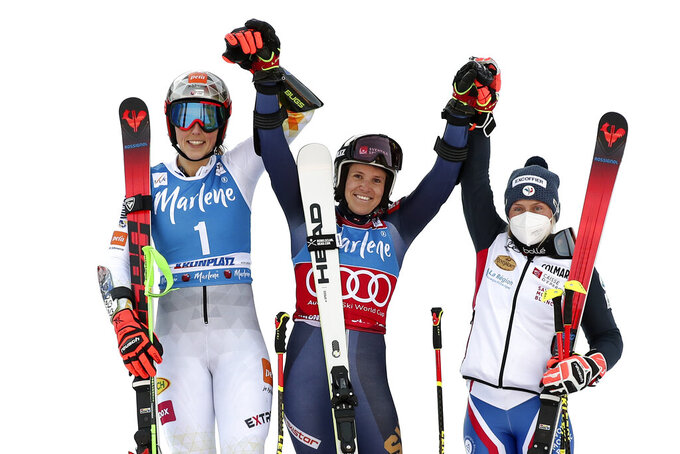 SAN VIGILIO DI MAREBBE, Italy (AP) — After waiting seven years for a second World Cup win, Sara Hector now has three more victories in giant slalom — and they could not have come at a better time with the Winter Olympics starting next week.

Hector won the final World Cup GS on Tuesday before the Beijing Olympics, with 2018 gold medalist Mikaela Shiffrin in fifth.

Hector was second after the opening run but overtook defending overall champion Petra Vlhova for her second straight GS victory, and her third this season. Her only previous World Cup win had been in December 2014.

The Swedish skier let out a scream after crossing the line 0.15 seconds ahead of Vlhova on a clear and cold day at Kronplatz mountain in the Dolomites.

“Crazy! I couldn’t believe my eyes when I saw I was that fast when I came to the finish. Incredible,” Hector said. “There are so many good skiers I’m definitely not unbeatable. But now I’ve been fast so that’s really, really cool.”

Tessa Worley of France was third, 0.52 behind Hector and just ahead of Federica Brignone. Shiffrin was 0.81 slower than Hector and slipped to third in the giant slalom standings.

Hector leads the standings ahead of Worley by 95 points. The 29-year-old puts her improvement down to developing a better understanding of her needs.

“I think for me the most important is to really feel calm...so I can focus. I’m easily wound up and then I’m having problems,” Hector said.

“It took me a long time to understand what I need. Now I know much more about what I need and that’s been cool to find out.”

The giant slalom opens the women’s skiing program in China on Feb. 7.

Shiffrin also lost ground in the overall standings. The American skier's lead over Vlhova was cut to only 17 points.

“When you are first after the first run you want to win,” said Vlhova. “But it’s really difficult to beat Sara because she’s really strong this year.”

The women’s World Cup circuit moves this weekend to Garmisch-Partenkirchen, Germany — where a downhill and super-G are scheduled — before a pause for the Olympics.