Here we go again? Lock, Broncos in a familiar spot 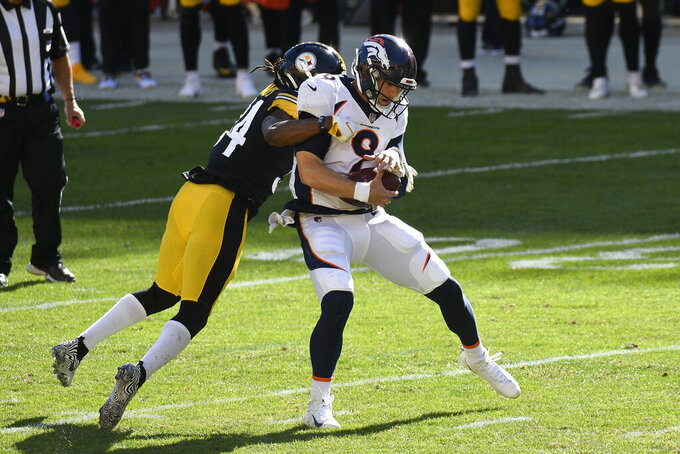 PITTSBURGH (AP) — Drew Lock is getting a sense of deja vu. So are the Denver Broncos. And not in a good way.

The second-year quarterback's status is uncertain after his right shoulder was driven into the ground in the first quarter of a 26-21 loss to the Pittsburgh Steelers on Sunday. Lock was scrambling to his right after narrowly avoiding being sacked by outside linebacker T.J. Watt when fellow linebacker Bud Dupree crashed into him, driving Lock's right (throwing) shoulder into the Heinz Field turf.

Lock didn't return, instead watching with a sling over his arm as a stirring rally by backup Jeff Driskel fell short. Driskel was sacked on fourth down at the Pittsburgh 15 with less than two minutes to go.

The loss dropped the Broncos to 0-2, both games decided by a touchdown or less. They endured a similar start in 2019, when they started 0-4, with three of the losses coming in one-score games.

“We’ve proven we can put ourselves in position to win against two really good teams, two teams that most people have picked to go to the playoffs,” Denver head coach Vic Fangio said.

Maybe, but Fangio knows more is expected in his second season after going 7-9 last year. Injuries haven't helped his cause. Denver is already without star linebacker Von Miller and running back Phillip Lindsay. Pro Bowl wide receiver Courtland Sutton caught three passes for 66 yards in his 2020 debut, but left in the second half with knee and leg issues. Throw in Lock's uncertain status and it's already been a trying season, pandemic or no pandemic.

“We obviously don’t want those guys hurt,” Denver tight end Noah Fant said. “They would help us a lot right now, but we’ve just got to keep pressing forward, and you know it’s one of those things where we’ve just got to get with the guys we got and try to score and try to stop teams. It says a lot about our team to stay with a great Pittsburgh team, but obviously not good enough.”

Not that Fant — who caught four passes for 57 yards and a touchdown — or Driskel didn't try. Driskel, who went 0-3 for Detroit last season before signing with Denver in March, completed 18 of 34 passes for 256 yards with two touchdowns and a pick. He also took a serious beating at the hands of one of the NFL's most aggressive defenses. The Steelers sacked him six times and knocked him down 11 others.

“My job is to give the team a chance to win and we didn’t do that, so I’ve got to make a couple of more plays here or there and maybe it’s a different ballgame,” Driskel said.

Not exactly. Driskel looked overwhelmed early, partly due to the lack of time working with the starters during a shortened training camp that did not include a single preseason game. He steadied himself after the break. The final sack he took wasn't entirely his fault. Pittsburgh safety Terrell Edmunds came in unblocked off the edge, dropping Driskel before he could get set.

“I’ve got to find a way to get the ball out there and if my eyes are in the right spot it happens a lot faster and I can find a way to navigate the throw and get it to somebody who’s running free,” Driskel said.

Neither Fangio nor Lock elaborated on the extent of Lock's injury, though Lock expects to undergo an MRI to assess the extent of the damage. He missed three months as a rookie in 2019 when he stumbled while attempting to avoid a sack and landed on his right thumb. Lock, who had been sacked just five times in six career starts coming in, has no plans of changing the way that he plays in order to protect himself.

“I’m going to stay aggressive and just try not to have these awkward things happen and fall weird,” Lock said. “But there could be a sight adjustment into what I think is a makeable escape, so to say, but I’m going to stick true to my guns.”

If he has to silence them for a little while to recover, Denver's chances of climbing out of an early hole will fall to Driskel. He impressed the Steelers with his toughness, and his coach with his resilience. He'll need to rely on it going forward if required to navigate an upcoming schedule that includes Tampa Bay and Tom Brady, the New England Patriots, and reigning Super Bowl champion Kansas City, all before Halloween.

“I thought in lieu of all the circumstances, going against a good defense," Fangio said, "I thought he did an admirable job and he’ll only get better if we have to continue with him.”