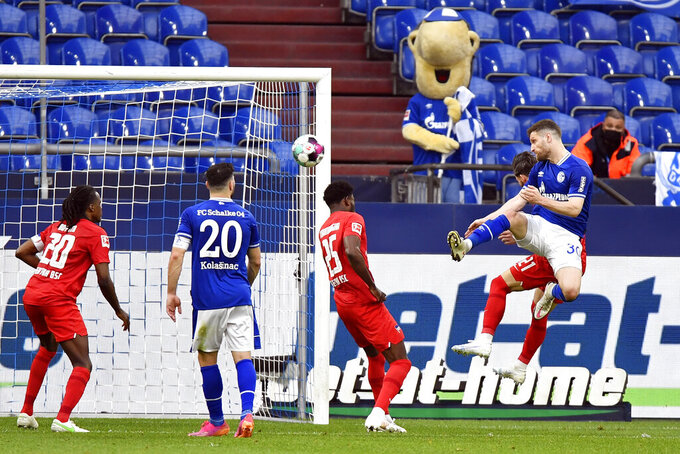 BERLIN (AP) — Hertha Berlin took another step toward Bundesliga survival on Wednesday with a 2-1 win over already-relegated Schalke, whose squad was depleted by the coronavirus.

“It's a good feeling because now we have two match balls. We’ll manage that,” said Hertha coach Pál Dárdai, whose team is three points clear of the relegation zone with two rounds left. “We're all very happy, proud. But it's not yet the end.”

Schalke was missing seven players due to COVID-19 -– three due to positive test results and four more due to their close contact to the infected individuals -– while Hertha was slowly returning back to full strength after its outbreak of cases.

Defender Marvin Plattenhardt started his first game after recovering from the virus and forward Dodi Lukebakio also returned, coming off the bench for his first game in a month. Lukebakio was sent off late, however, after yellow cards for a tactical foul and bad challenge.

It left Hertha holding on for a win that lifted the side to 13th in the 18-team league. Schalke hit the post twice in quick succession in injury time.

Schalke was only playing for pride, while Hertha was playing its fourth game in a catch-up schedule after having to quarantine for two weeks. Dárdai was among those infected.

Hertha goalkeeper Rune Jarstein, the first to become infected last month, will not play again this season. The Norwegian was very sick and needed treatment at Berlin’s Charité hospital.

Hertha was given an early shock when Amine Harit put Schalke ahead in the sixth minute. Sead Kolasinac played the ball to Harit, who eased past three defenders before shooting inside the far post.

Dedryck Boyata equalized with a thumping header after a free kick in the 19th. It was the Hertha captain’s first goal of the season.

An injury to Polish striker Krzysztof Piatek added to Hertha’s problems in attack before the hour mark. The club’s top scorers Matheus Cunha and Jhon Cordoba were already out through injury, while Maximilian Mittelstädt didn’t play after getting concussed in Hertha’s draw with Arminia Bielefeld on Sunday.

Jessic Ngankam, who came on for Piatek in the 58th, finally rewarded the visitors’ pressure in the 74th after a good run from Nemanja Radonjic, who was causing Schalke’s defense problems on the left.

“I've been here (at Hertha) since I was six, a real Herthaner, and so it's normal that you're even more proud to have helped the team a bit,” said the 20-year-old Ngankam, whose only other Bundesliga goal was against Bayern Munich last October.

Schalke goalkeeper Ralf Fährmann denied Radonjic what would have been Hertha’s third goal, before Lukebakio’s sending off reduced Dárdai’s attacking options further for his team’s next game – at home to relegation rival Cologne on Saturday.