Hertha Berlin returns from quarantine to draw at Mainz 1-1 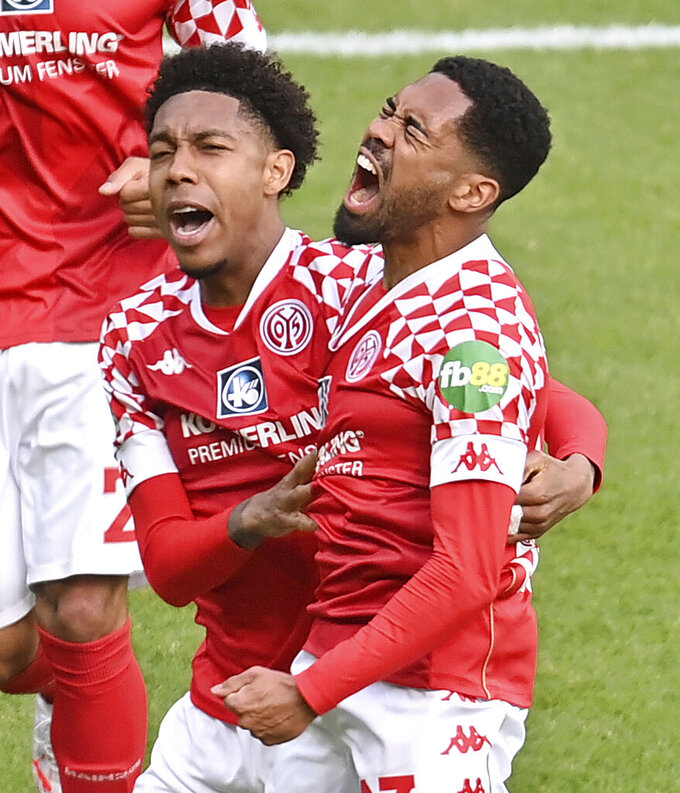 Mainz's Phillipp Mwene, right, celebrates with teammate Jean-Paul Boetius, after scoring his side's first goal of the game during the German Bundesliga soccer match between FSV Mainz 05 and Hertha BSC in Mainz, Germany, Monday, May 3, 2021. (Torsten Silz/dpa via AP)

BERLIN (AP) — Hertha Berlin began its 20-day quest to secure Bundesliga survival after its coronavirus outbreak by fighting at Mainz to draw 1-1 on Monday.

It was the first of six games that Hertha faces through May 22 to make up for the postponement of three games while its players and coaching staff spent two weeks in self-isolation at home following COVID-19 infections at the club. The team gathered on Friday to train together for the first time since April 15.

“We were so exhausted from training. Our fitness coach chased us through the home," Hertha midfielder Sami Khedira said of the quarantine measures.

Lucas Tousart’s first-half header earned Hertha a point that cut the gap to Arminia Bielefeld and safety to three points. Hertha next faces Freiburg at home on Thursday then hosts Bielefeld on Sunday.

Tousart connected with Márton Dárdai’s free kick in the 36th. It was the French player’s first Bundesliga goal since his transfer for a reported 25 million euros from Lyon last summer.

Hertha coach Pál Dárdai reacted with three changes at once with just under half an hour to go. Hertha captain Dedryck Boyata was among those who went in, the Belgium defender returning from injury for his first appearance since December.

“We're very satisfied,” the Hertha coach said. “We're here for the points. It was the case all week. I always said a point is important for us. Three would have been nicer but we're very happy to get a point.”

Mainz moved six points above the relegation zone after its eighth consecutive game without defeat.