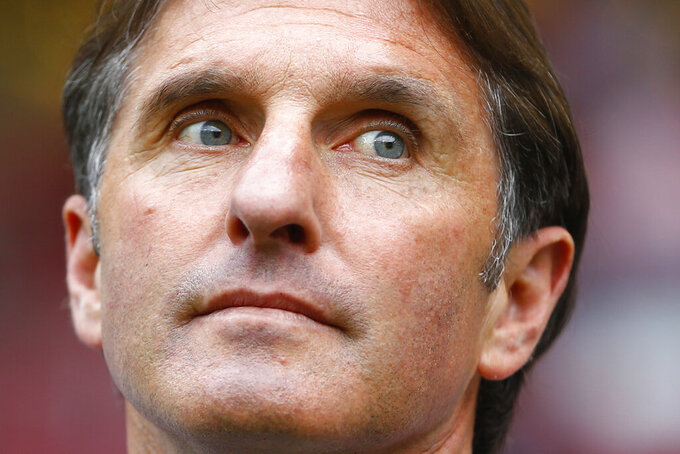 FILE - In this May 16, 2015 file photo Hamburg's coach Bruno Labbadia arrives for the German first division Bundesliga soccer match between VfB Stuttgart and Hamburger SV at the Mercedes Benz Arena in Stuttgart, Germany. Hertha Berlin presented Bruno Labbadia as its new coach on Monday. Nobody knows when the 54-year-old can lead a normal training session or when his first game will can be played. “The plan is to prepare the team as well as possible for day X,” Labbadia said.(AP Photo/Matthias Schrader, file)

BERLIN (AP) — Hertha Berlin presented Bruno Labbadia as coach on Monday despite not knowing when the 54-year-old German can lead a normal training session or when his first game can be played.

The Bundesliga, like other major soccer leagues around Europe, has been suspended indefinitely because of the coronavirus pandemic.

“The plan is to prepare the team as well as possible for Day X,” Labbadia said.

Amid the shutdown, Hertha took the opportunity for another change to address the chaos caused by the previous three coaches. The club is hoping Labbadia can bring some order to the team once, or even if, the league resumes.

With a $250 million investment from new backer Lars Windhorst, Hertha has ambitions of soon challenging for the Bundesliga title. But first it must focus on avoiding relegation.

Hertha is six points above the relegation zone in the 18-team division with nine games of the season remaining.

“Before we think of the future, we have to deal with reality,” Hertha general manager Michael Preetz said. “Of course it’s still our ambition to move further forward. Bruno is sitting here because he also likes to orient himself toward the upper part of the standings.”

Preetz said the club decided to change coaches so Labbadia would have time to get to know the players and have some input on decisions ahead of next season.

Predecessor Alexander Nouri had been in charge for only four games after taking over in February from Germany great Jürgen Klinsmann, who left Hertha in chaos when he abruptly quit after nine league games.

Former youth coach Ante Covic had been in charge at the start of the season.

Preetz said Labbadia had offered to forgo “a large part” of his salary “until we can play soccer again” to help Hertha get through the coronavirus crisis.

Labbadia had been out of work since leaving Wolfsburg at the end of last season. He led the Volkswagen-backed club to European qualification but had a frosty relationship with sporting director Jörg Schmadtke.

Labbadia said the players were training Monday in groups of two, focused on ball-recovery, but that he planned to introduce his game plan later by dividing them into groups of three.

“I'll be happy if in three months you say, ‘Great, I see what he wants.’ Then we’ll have had a good start,” Labbadia said of establishing his ideas.

The Bundesliga plans to resume play without fans some time in May, but health authorities and local politicians will decide if that’s possible depending on how Germany copes with the pandemic in the meantime.

As of Monday, the country had more than 125,000 confirmed cased of COVID-19, with 3,022 deaths attributed to the disease, according to Johns Hopkins University.

“We agree with the political situation — first health, then the resumption of the game,” Preetz said. “We hope we can finish the season by June 30.”